Audiobooks: THE DISPLACEMENTS; KING OF BATTLE AND BLOOD; RESERVATIONS FOR SIX; CELIA AND THE FAIRIES (The Watchful Woods, Book 1); CUPCAKE; HISTORY OF WOMAN SUFFRAGE, VOL. 1: 1848-1861


A performer since the age of three, Austenne is classically trained in ballet and voice with projects involving The Richmond Ballet, the North Carolina Opera, Playmakers Repertoire Company, and Theatre Raleigh. Recently, she has turned to narration working with HarperTeen and Creative Indie. Her roles often include a variety of accents including Southern (Georgia, Tenn., NC, etc.), French, Eastern European, Russian, British, and more. With a wide vocal range, Austenne's characterizations can include the softness of a church mouse to the grandness of the Lord of Hades. Austenne is looking forward to voicing her next projects - a sci-fi adventure series, a romance, and a dark fantasy series. 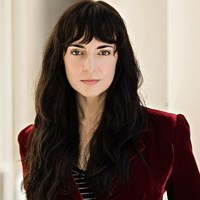