Audiobooks: STARFISH; FEEDING THE DRAGON; RIVALS! FRENEMIES WHO CHANGED THE WORLD; BALL PARK; THE END OF MY HEART; ARCHANGEL

Gabriel Vaughan is an Audie award winning narrator of over 175 titles, specializing in character driven sci-fi with a heartfelt sense of humor. His wife and fellow narrator Piper Goodeve have home recording studios in Vermont and Brooklyn and have narrated over 50 dual-cast titles together. He has a BA from Sarah Lawrence College and is a founding member of the Tennessee Shakespeare Company. 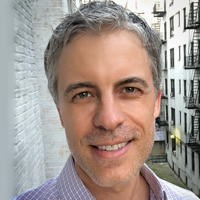