Audiobooks: HEART OF GOLD; HEART SINGS; DEAR KANE (What I Wish We Would Have Said); MARK OF THE MAKER; MAGICK AND THE MAKER


Jen is a nonbinary voice actor, specializing in LGBTQIA+ narrative projects. Their professional training is focused in classical acting technique, voice and speech as well as dramatic prose interpretation and cold reading. In addition to audiobooks, Jen’s voice has appeared in ad spots for Pepsi-Cola, Lucky’s Supermarkets and numerous radio ads for regional businesses. They are based in the Pacific Northwest, Seattle Market. 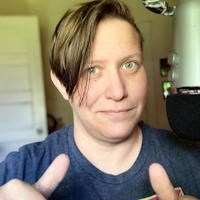