Audiobooks: THE CHOSEN; LUCY AND DESI; TO FETCH A THIEF; WORLD GONE BY; DARK CAROUSEL


Jim is the voice of several of Dennis Lehane’s books (The Drop, World Gone By and Live By Night), J.R. Ward's popular Black Dagger Brotherhood series, the Black Dagger Legacy series, Spencer Quinn's very funny Chet and Bernie Mysteries as well as many of Christine Feehan’s books. Jim has narrated over 300 titles, was awarded AudioFile Magazine’s “Best Voices of 2015” for his narration of World Gone By. His narrations for The Chosen and Lucy and Desi were both AudioFile’s “Best Audiobooks of 2017”. Jim has received numerous Earphones Awards and was nominated for an Audie Award for fiction. An actor, director and playwright, Jim has most notably performed in many of the world premiere plays and films of David Mamet. He is artistic director of the Barrington Public Theater in Great Barrington, MA (www.barringtonpublictheater.org)(www.jimfrangione.com)
See full audiography
See editorial profile 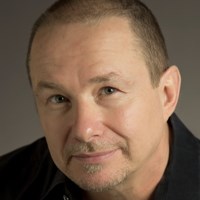