Audiobooks: DAUGHTER OF SMOKE AND BONE; FROG MUSIC; EXTRAORDINARY MEANS; THE RESTORER; CONVERSION; IF NOT FOR YOU

Khristine Hvam is an award winning audiobook narrator, producer, director and voice over actress. You will hear her in TV/Radio commercials, video games, animated series, and most notably in over 250 audio book titles. She has been awarded two Audio Publishers Association Audie Awards for her performance of Lani Taylor’s “Daughter of Smoke and Bone” and for “Astray” by Emma Donoghue. Khristine has also received six AudioFile Magazine’s Earphone Awards for her performances including AudioFile’s “Best of” for 2015 and 2017. Khristine is the co-creator/producer/director of the very first AUDIOBOOK MUSICAL, “SPIN, The Rumpelstiltskin Musical.” Khristine is a proud member of SAG/AFTRA. 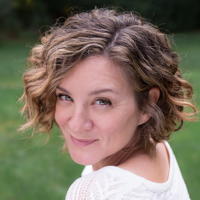