Kyla Garcia is a nine-time Earphones Award Winner, ALA Honor recipient, and two time Audie nominee. She's also the English voice of Lidia Aguilar on Netflix’s hit show Cable Girls which will start its fourth season this summer. Favorite storytelling moments include starring in "Pure Native" by Vickie Ramirez at Native Voices at the Autry, originating the role of Sarah Ridge Polson in the World Premiere “Sovereignty” at Arena Stage where she got to perform for Ruth Bader Ginsberg and Gloria Steinem, starring in and producing the digital series "Herstory 101," and creating the critically acclaimed one-woman show “The Mermaid Who Learned How to Fly” which she also adapted into an audiobook. 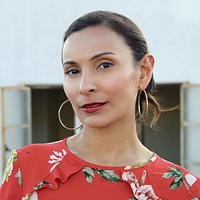