Audiobooks: THE ONE MEMORY OF FLORA BANKS; MOONDROP TO GASCONY; A MOST EXTRAORDINARY PURSUIT; BEASTLY BONES; THE OTHER DAUGHTER; JULIET’S NURSE

Nicola Barber’s voice can be heard on television and radio commercials, popular video games such as World of Warcraft, and even in talking toys. But her true passion lies in bringing to life the characters and scenes in novels, a talent for which she has received four Audie Awards, a SOVAS award, and multiple Earphones Awards. Nicola is also a two-time Audie nominee in the prestigious “Solo Female Narration” category for her work on Murphy’s Law (Rhys Bowen) and Call The Midwife (Jennifer Worth). Originally from England, Nicola currently resides in New York—a multicultural background that enables her to bring a broad range of accents and characterizations to her role as a full-time voice over actor. 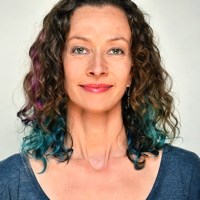