Though they also perform Solo Narration, Kendra Murray and Ralph Scott are the Duet Narration and Dual Narration team that brings the dynamic of their radio theatre backgrounds to storytelling. Indeed, as evidence that 'they suspect their lives are based on a true story,' they were actually married as the resolution to a Sherlock Holmes radio drama and before an unsuspecting local and worldwide (S.F. Bay Area's kpca.fm) audience. 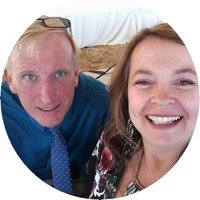