Renée Raudman is an award-winning audio book narrator, who has used her TV & film acting experience to build a loyal audience for her nearly 300 audiobooks. Renée’s commitment to story, characters, & her strong voicing of both her female & male characters, has earned her several Earphone Awards, a Publisher's Weekly "Listen UP" award, several "Starred Reviews" by PW as well as nominations for several Audies. 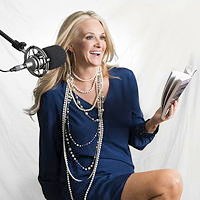