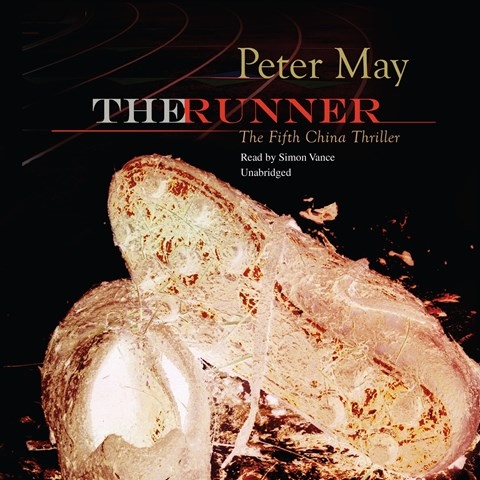 by Peter May | Read by Simon Vance

Simon Vance's performance will leave listeners breathless in the fifth episode of Peter May's China series. Vance brings his superior narrating skills to May's police procedural starring the detective team of Li Yan, chief of the Beijing Municipal Police, and Margaret Campbell, a forensic pathologist who is Li Yan's American fiancée. China's top athletes are being murdered. Three members of China's sprint-relay team, a cyclist, a top swimmer, and a world-class weight lifter are dead. A female runner appeals to Margaret, fearing she will be next. Vance is splendid in this engrossing story of Beijing life, internal police politics, Chinese Triads, genetic research, and brutal megalomaniacs who stop at nothing to succeed—not even murder. Vance makes THE RUNNER top-notch listening. S.J.H. Winner of AudioFile Earphones Award © AudioFile 2010, Portland, Maine [Published: MAY 2010]