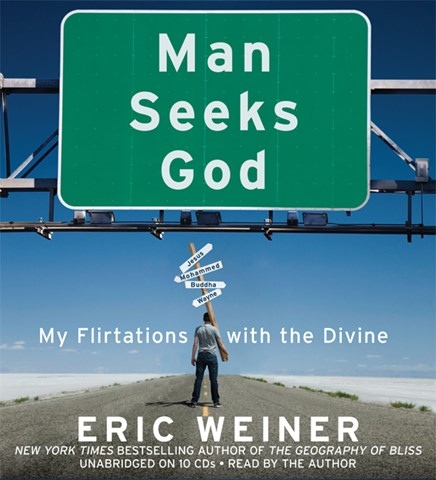 MAN SEEKS GOD My Flirtations with the Divine

Eric Weiner is irreverent and self-deprecating as he samples eight religions around the world in an attempt to answer the nurse's question at the hospital--"Have you found your God yet?" Each chapter starts with a personal ad from a "Confusionist white male" looking for God, accompanied by music, before heading off to a different part of the world. His investigations range from Sufi Islam in Turkey and Tibetan Buddhism in Nepal to Wicca. Weiner is always engaging-- although it's not entirely clear how sincere his search for God is. No matter. Weiner is at his most uproarious relating his cross-dressing adventures at the Raëlism convention in Las Vegas, a U.F.O. based sect formed by a French journalist, and channeling his spirit animal with the shamans. A.B. © AudioFile 2013, Portland, Maine [Published: JULY 2013]