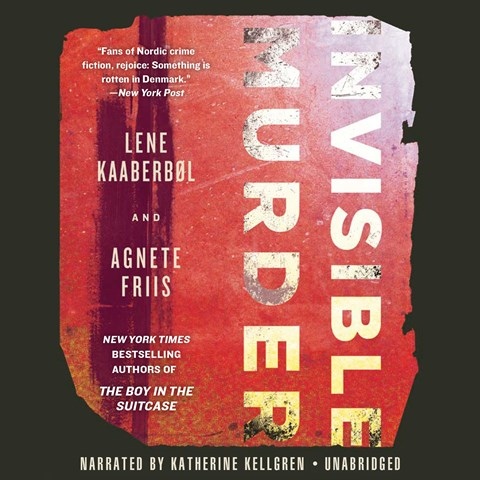 Katherine Kellgren uses a British accent for most of Kaaberbøl and Friis’s second novel featuring Danish Red Cross nurse Nina Borg. Kellgren’s narration is outstanding, with bright energy, sharp intonation, and the ability to move easily between a variety of ethnic accents. The multiple subplots involve a group of ailing and impoverished Romani hiding in a Copenhagen garage, the travails of a senile Danish gentleman and his gardener wife, an “artifact” found by Gypsy boys in an abandoned Russian military hospital in northern Hungary, and a Danish intelligence agent following leads to a possible terrorist attack on Danish soil. The most compelling subplot involves a half-Romani Hungarian law student who is accused of conspiring with Muslim terrorists. As all these subplots converge, Kellgren ramps up her vocal talents for a climax that puts Nina Borg and her daughter in peril. S.E.S. Winner of AudioFile Earphones Award © AudioFile 2012, Portland, Maine [Published: DECEMBER 2012]