Audiobooks: THE LIGHT IN HIDDEN PLACES; EMPRESS OF THE NIGHT (A Novel of Catherine the Great); ILLUMINAE: The Illuminae Files; THE TSAR OF LOVE AND TECHNO; DRIVE YOUR PLOW OVER THE BONES OF THE DEAD


Beata narrated Catherine the Great bestsellers "The Winter Palace" and "Empress of the Night”. "Illuminae", received an Audie Award. "The Tsar of Love and Techno" was selected in the Top 5 Best Audiobooks of the year by The Washington Post. She received Earphones Awards for narrating Nobel Prize Winning Tokarczuk’s “Drive Your Plow ” and for “The Light in Hidden Places”. Nominated five times for a Voice Arts Award among them “Libretto for the Desert for the Victims of Genocide and War”. She is a classically trained actress and holds a Masters Degree in Film and Drama.
See full audiography 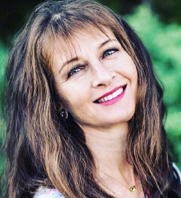