“It’s so natural to record my own work. I don’t have to worry about what the author might be thinking." 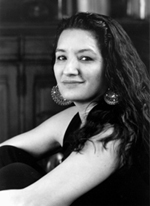 It takes a lot of moxie to model your main character’s mother after your own, especially when your real-life mother has earned critical acclaim in your chosen field. Carol Higgins Clark, however, sees more fun than competition, more affection than comparison in her relationship with bestselling mystery author Mary Higgins Clark. So when Carol’s editor suggested she make private detective Regan Reilly’s mother a famous mystery writer, the daughter laughed and said, “Why not?”

In fact, mother and daughter have co-written two holiday novels, DECK THE HALLS (2000) and HE SEES YOU WHEN YOU’RE SLEEPING (2001). “When we write as a team,” says Carol Higgins Clark, “we make a much more detailed synopsis than either of us would do on our own work. Then we sit down side by side at the computer and write every line together. There are no egos in the way; we’re very comfortable working together. We just want to tell the best story we can.”

After the writing, Carol takes on the job solo, providing the narration on the audio editions. A former professional actress, she has recorded some of her mother’s volumes, as well as the abridged versions of her own successful Regan Reilly series. “It’s so natural to record my own work,” she says. “I don’t have to worry about what the author might be thinking. While I’m well aware that there are at least 25 different ways to say the same sentence, I know, in this case, exactly what the writer intended.” Once she’s in the Simon & Schuster studio, the recording process becomes a lot of fun. “I really get into a zone,” she says, “and quickly get into just telling a good story.”

With all the writing she’s doing these days, and the recording, book tours, and promotion involved in publications, there’s not much time for acting. By the time the business of one book is winding down, another is coming due at the publisher. Would she care to offer AUDIOFILE readers a sneak preview of the next Regan Reilly mystery? “I would, but I have no idea what it will be!” she laughs. “All I know is that the title will end in ‘ed.’”--Ruth Lind