“The nature of a writer, I find, is to follow la Voz--the Voice--a calling--not a vocation exactly but a pursuit more earthy than that.” 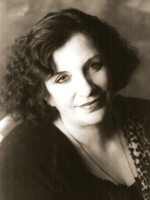 Most people know Clarissa Pinkola Estés as the author of WOMEN WHO RUN WITH THE WOLVES, her 1992 bestselling book that reminded readers that wise and powerful women were important in cultures past. Estés is a practicing Jungian psychoanalyst and the author of many books and audio programs that empower women with rich storytelling.

Her latest book is THE DANGEROUS OLD WOMAN. In it Estés says that she doesn’t want a woman to think, “I am not enough.” Instead, she wants a woman to think, “I am so much--where shall I start? Where shall I put my mark?” Estés’s writing speaks to women who need permission to be assertive with their gifts, to overcome weak cultural stereotypes, or to stay connected to their souls in the face of loss or tragedy. “Women are completely overqualified to be ordinary, to be obedient. Women are completely qualified to embark on odysseys, to beat the odds, to sail forward with all flags burning, to be silent only when it suits their souls.”

Estés’s reverence for storytelling is reflected in her approach to both writing and audio narration. “The nature of a writer, I find, is to follow la Voz--the Voice--a calling--not a vocation exactly but a pursuit more earthy than that.” When asked if she writes to a particular audience, she replies, “‘Audience’ is not a word that comes to mind in my work.” Instead, she thinks of her Voice and asks: “Where is there suffering, where are the prisons, where is the lone traveler?” And when her Voice speaks to her, she finds herself writing anywhere--including in her pickup truck or at the grocery store.

Estés chides people to talk less and do more, even when some of the tasks are mundane or difficult: “There are parts in all matters worth having that are less than thrilling. But craft isn’t based on thrills. It’s based on daily hard work, on devotion.” Estés’s work in the recording studio reflects this kind of devotion.

“As I prepare to enter and move into the audio work, I’m just asking that I be allowed to hear clearly and to convey what I sense, know, and hear with infinite care to those who listen.” She says the Sounds True audio engineers are critical to this process, along with her publisher, Tami Simon, who “flies wingtip to wingtip” with her while she’s recording.

In THE DANGEROUS OLD WOMAN and all her other audios, Estés is a spiritual teacher, providing nourishment to souls who need it and empowerment to women whose gifts are not yet being expressed. After sharing a moving encounter she once had with an elderly woman who baked whole wheat bread for pigeons at a church cemetery, she reflects on her work: “I’m the old woman striving to lay out food and love for the ailing and robust, the hesitant and the happy pigeons behind the church. I’m the old lady feeding the winged ones the most nourishing food I can bake.”--Thomas Walken