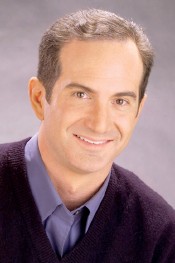 It would be hard to imagine a more engaging audio teacher than author and CNN financial commentator David Bach. His books and audios, including THE AUTOMATIC MILLIONAIRE, are among the best financial guides available in any medium. In contrast to losing weight, which he says requires daily discipline, money management can be automatic. “Becoming wealthy is incredibly simple. It’s just not easy. But if I can get you in one hour to do a handful of things that set up automatically, you’re done unless you shut it off. It doesn’t take ongoing motivation.”

A former Senior VP at Morgan Stanley, Bach got the idea for his first book from a talk he gave called “Smart Women Finish Rich.” “It was standing room only and when the speech was over, they all stood in line for me to sign a book, and I didn’t have a book.” After writing his first, named after the seminar, and later narrating the audio, he followed it with others such as SMART COUPLES FINISH RICH, THE AUTOMATIC MILLIONAIRE, and his latest, START LATE, FINISH RICH. The new book is the result of seven years of being hit over the head by people telling me ‘It’s too late. It’s too late.’ I had to show them how it’s not too late, how we can help people catch up.”

On audio and his TV appearances on “Oprah” and CNN’s “American Morning,” Bach’s approach is a fresh and welcome antidote to the pain of chronic money problems. His early experience teaching small groups in the 1990s was exhilarating. “It was the best I ever felt in my life—teaching and seeing people ‘get it.’ What I did on the Oprah show is exactly what I’ve been doing for 10 years. It’s what I love to do, teaching people about money, because I believe that money either can free you or can handcuff you. Without money, you’re not in a position to figure out your purpose in life.”

How does he like recording audios? “I love talking, as you can see, but it is a lot of work to go into a studio. I actually speak really quickly and I slur, so you go into these studios and sometimes the producers try to get you to E-NUN-CI-ATE every word perfectly, and I’ve had to say to them, ‘Listen, guys, this is how I talk. You’re not going to change the way I speak today in the studio. Just let me do what I do.’”

Speaking from the Manhattan offices of Finish Rich Media, Bach sounds genuinely grateful for his success and his family. “I’ve had a phenomenal team around me.” He lives in New York City with his wife, Michelle, and a son, Jack. “I’ve got a wonderful wife. The best thing I’ve ever done is have this little boy.”—Thomas Walken