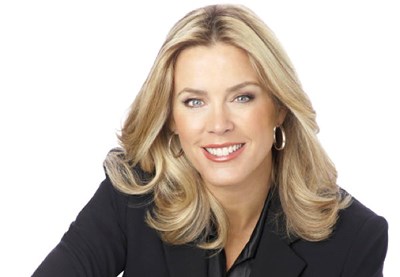 “I wasn’t looking to write a book. I was just curious...I just wondered about this topic, and the more I found out, the more intrigued I was.”

Other network jobs followed, along with some well-known career bumps, on her path to 13 years of success as host of CBS’s “Inside Edition” and winner of two Emmys. Asked about her staying power, she says, “For whatever reason, I’m able to look right through that camera and look right at you. This is the feedback I get all the time.”

Beyond her obvious appeal, fans also see intellectual curiosity running through her work, curiosity that fueled two years of spare-time research on gratitude and positive psychology. “I wasn’t looking to write a book. I was just curious, and that’s what got me into this business in the first place. I just wondered about this topic, and the more I found out, the more intrigued I was.” That research led to her latest book--THANK YOU POWER--a tightly written collection of research summaries, exercises, and case narratives that, in audio format, unfolds like a first-rate documentary.

For the recording of the book, the busy TV anchor spent three mornings in a lower Manhattan sound studio before rushing uptown to prepare and tape her daily show. Accustomed to ad-libbing on camera when adjustments are needed, she quickly learned not to make changes while reading for the audio. “You don’t do that in books! I’m so used to thinking--‘Oh, it sounds better this way’--and the minder, she’d say, ‘Nope, that’s not the way it was written,’ and she’d make me start over.” The tone of the finished recording is an audible blend of determined reporting and compassion, which she says was inspired by a friend in his 70s whose ability to read was devastated by a stroke. “As I read THANK YOU POWER, Don was in my mind the entire time because it was always my hope when I wrote this book that he would get to hear the audio version of it.”

The immense work that goes into a daily news program is apparently not enough for the talented reporter, who is also married and the mother of three children, ages 18, 14, and 11. On the morning we spoke with her by telephone at her CBS office, she was proofreading her new book on knitting, one of the many forms of needlework she’s enjoyed since childhood. “Everybody in New York has a shrink. I have a Kenmore. Making things is my way to blow off the energy I always seem to have.” The relentless investigator is already working on a new book about the role of respect in personal achievement. “Gratitude is an other-focused quality, as opposed to a ‘me-me’ thing. Respect is also an other-focused frame of mind, and another one of the imperatives of interpersonal relationships that has fallen by the wayside.”--Thomas Walken