"Leonard began telling tales on the printed page while toiling as an advertising copywriter. 'I wrote in my drawer. I didn’t want to get caught writing something else when I should have been writing Chevrolet ads—which were hard to get into, I’ll tell you." 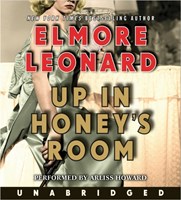 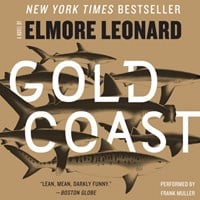 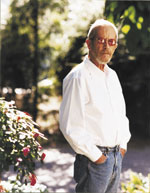 Quintessential crime novelist Elmore Leonard has been clearing the criminal underbrush of Detroit, Michigan—with side junkets to sunnier climes like California and Florida and such foreign venues as Rwanda and Cuba—for more than a generation. Scams and murders have alternated and meshed as tawdry tapestries upon which he’s sprinkled his rowdy band of lowlifes with their deliciously economical chatter. Like the late Ted (Dr. Seuss) Geisel, Leonard began telling tales on the printed page while toiling as an advertising copywriter. "I wrote in my drawer," the writer, 78, says. "I didn’t want to get caught writing something else when I should have been writing Chevrolet ads—which were hard to get into, I’ll tell you."

He was in his mid-20s, in the early 1950s, when he began that secluded second career—starting with Westerns. It was the afternoon of the genre, and he was fortunate enough to see some of his stories ("3:10 to Yuma," "The Tall T") and one fine novel (HOMBRE) become movies during the decade that followed. When he turned to crime, 84 publishers and film producers rejected his debut title, THE BIG BOUNCE, but it did see the light of day as a paperback original. Then the film rights were sold, for $50,000 (a remake opened earlier this year), and Leonard’s Western phase reached the end of the trail.

A number of his stories about the contemporary criminal mind have reached the screen; many, including his latest—MR. PARADISE—have found their way to audio, with an eclectic mix of narrators—some of whom, like Steve Buscemi and Taye Diggs, were pitched by the author. The reader of the new book is Robert Forster, also the writer’s call. Leonard first encountered him around 1996, when Quentin Tarantino cast the veteran actor in Jackie Brown (based on Leonard’s 1992 novel, RUM PUNCH).

"Tarantino called and said he’d decided to do RUM PUNCH and that he was thinking of Robert Forster as Max Cherry. I said, ‘I haven’t seen him in a picture since 1969.’ He was dead set on getting him." During the current television season, Forster has costarred in ABC’s "Karen Sisco" series, based on the writer’s 1996 novel, OUT OF SIGHT.

If Leonard, by his own admission, is an infrequent listener to audiobooks, he’s certainly well grounded in the genre’s prehistory, having been a great fan of "The Lone Ranger," "The Green Hornet," and other radio serials as a kid. As his own five children were growing up, he says, he told them stories—"about lost boys, or about a foot-high person named Benjie, who would take the kids flying out the window." In fact, the next book of his to emerge will be a children’s story, COYOTES IN THE HOUSE.

Leonard suggests that the narrative sections of his stories are the most appealing to the growing audience for his audiobooks. "They’d certainly be easier to follow. The dialogue, as it goes down the page, doesn’t always identify who’s speaking. The occasional ‘he said,’ ‘she said,’ is in there for a beat, a pause, rather than identification."

Of course, "he said" and "she said" are hallmarks of Leonard’s fiction—underscoring one of his rules for writers. "Don’t throw a lot of adverbs in there," he has said repeatedly. "Always use ‘said’ to indicate dialogue. Never ever use an adverb to modify ‘said.’" Never!—Michael J. Bandler