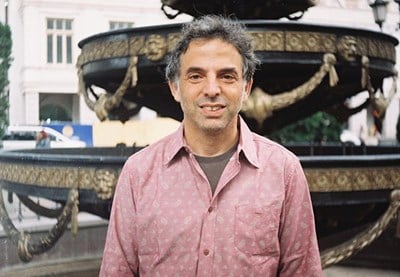 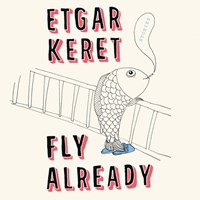 Etgar Keret, who was born in Tel Aviv in 1967, is considered one of the most popular writers among Israel’s young generation. He has also received international acclaim. His writing has been published worldwide, and more than 40 short movies have been based on his stories, one of which won the American MTV Prize. At present, Keret lectures at Ben-Gurion University of the Negev in Israel. The winner of numerous literary accolades and prizes, the multitalented Keret, and Shira Gefen, won the Cannes Film Festival’s Camera d`Or Award for their movie JELLYFISH, and Best Director Award of the French Artists and Writers’ Guild in 2007. His books have been published in 31 languages in 35 countries.

Keret’s new audiobook, SUDDENLY, A KNOCK ON THE DOOR, is a compilation of 35 masterful stories that are funny, sad, absurd, playful, beautiful, and ineffably human. Each one inhabits its own space and narrative arc, but the book is more than the sum of its parts. The collected stories show an author who can draw in readers with his skills and thematic focus, but Keret goes further. He’s passionate about audio and was instrumental in choosing the all-star narrators who read his book. Willem Dafoe, Ira Glass, Michael Chabon, and Gary Shteyngart are just a few of the authors, television personalities, and stage actors who bring life to Keret’s characters.

This was a learning experience for Keret, and he wasn’t quite sure what to expect. He understood that the narrators wouldn’t be as emotionally involved in his work, but he was willing to take a gamble that an audiobook would open his words to a wider audience.

As a collection, Keret’s stories rely on intense, tightly focused stories that are short but deeply emotional and thought provoking. He’s aware that he is asking his audience to give something of themselves in return for an affecting experience. He describes how he comes to his ideas in both simple and complex terms. “I see something around me that strikes in my mind. I write the same way you dream a dream. Sometimes the ideas are distant. Sometimes they are disjointed. But they are very emotionally present.”

The book was recorded in New York, but Keret was in Israel, so he had little input into the day-to-day direction. As he listened to the narration he was pleasantly surprised at how the readers interpreted his work. “I am grateful and happy about the audiobook. I learned about my writing by having others read it. The stories are much wiser than I am, and the readers are better readers than I am. This is the first of my books to be on audio, but I want all of my books to have narration.”

Many of the book’s narrators are trained actors, but some are other writers who do not have traditionally classic voices. Why did he like the narrators who were ultimately chosen for the project? “Many of the stories are about imperfections.

My characters tend to be stressed and slightly neurotic. I wanted diverse voices that would show that. That’s why I chose some narrators who had imperfect voices.”

Keret wanted to make sure that his readers would experience the full force of his words and believes that having an audio version enhances, and in some cases magnifies, the experience. “To me, it’s like the difference between someone telling you how great you are and someone giving you a hug.”

To Keret, the reader’s experience is the key, and using audio is one more avenue for him to connect with his growing international followers.—Robert I. Grundfest