"Flagg loves to listen to audiobooks and other recorded spoken works. Her favorites are old-time radio dramas. 'A lot of the writers were playwrights. So their radio dramas are really plays. They’re great to listen to.'" 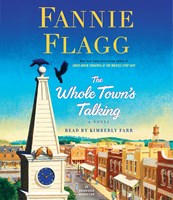 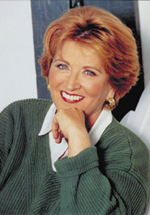 Her many years of acting haven’t masked Fannie Flagg’s accent as much as they have polished it. Flagg left Alabama after college “for dramatic school. Can you believe it?” She now calls Montecito, California, home for much of the year, along with neighbors like mystery master Sue Grafton. That works on her accent, too.

That accent is there but not overwhelmingly so when she reads the abridgment of her latest novel, STANDING IN THE RAINBOW. The primary character is Dorothy, a Missouri homemaker who is known throughout the region as “Neighbor Dorothy” because of a morning radio show that originates in her parlor. The tale is peopled with all manner of characters, including a charismatic tractor salesman, who winds up as governor, and Minnie Oatman, a gospel singer who finds fame despite herself. Their lives play out against a backdrop of contemporary history.

“I have a tendency to write the ending and then the beginning of a story. I’m sort of dyslexic, you see, so sometimes I have a hard time getting things in order,” Flagg says, adding a sort of exclamation point with her gentle laugh. “I wrote the middle of this story while I was writing WELCOME TO THE WORLD, BABY GIRL. And now I’ve written the beginning. I guess now I’m gonna have to write the end. I’m packing right now for a six-week book tour, and, mercy, now I’m gonna worry about that!”

Flagg says she loves to listen to audiobooks and other recorded spoken works. Her favorites are old-time radio dramas like Philip Marlowe stories and “The Shadow.” “A lot of the writers were playwrights. So their radio dramas are really plays. They’re great to listen to.” But there’s one author Flagg will never listen to. Herself. “Listenin’ to myself makes me ill. I wish I sounded like Olivia de Havilland. But when I listen to myself, I always think I could have done a better job. But you can’t. It’s best not to hear it and then beat yourself up about it.”

She does like to do her own reading, though, because as a writer and a comic actress, she feels she can interpret her work best. “I know where the laughs are!” she says, adding that exclamation point one more time.—Rich Gotshall