“You do take things in differently when you listen to them. I get new insights into the poems, things I didn’t realize were there. Just little twists of language. There is something about the spoken word that shakes into you.” 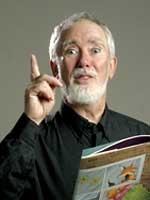 What do you get when you cross an insomniac poet eating a banana at 4 a.m. with a documentary on the Discovery Channel called “Anaconda: Giant Snake of the Amazon”? If you’re Jack Prelutsky, you get a “bananaconda.” Prelutsky, the nation’s first Children’s Poet Laureate and Consultant in Children’s Poetry to the Poetry Foundation, says, “It’s 3 or 4 in the a.m., and I’m bleary-eyed, and it occurs to me that the last three letters of the word ‘banana’ are the same as the first three letters of the word ‘anaconda.’” And from that chance encounter, the book Scranimals was born, featuring such delightful creations as “avocadodos,” “orangatangerines,” “mangorillas,” “porcupineapples,” and “hippopotomushrooms.” And because one book leads to another, in a later volume, BEHOLD THE BOLD UMBRELLAPHANT, he combined animals with objects, resulting in such fanciful beasties as “ballpoint penguins,” “spatuloons,” and “zipperpotamuses.”

Born in Brooklyn, Prelutsky was turned off to poetry by an elementary school teacher. “She wasn’t enthusiastic about poetry and taught it in a boring way.” In junior high, he had a teacher who was “a dissectionist. He did to a poem the same thing I was made to do to a frog in biology. If you do that, the poem loses life and meaning.” Prelutsky admits, “For me, poetry became the literary equivalent of liver.”

All that changed, however, when he became a folksinger in his early twenties. “I was really taken by the simple language of folk songs. There were no fancy inversions. You just said what you meant, and I liked that.” Before poetry became his life’s work, Prelutsky played the guitar, was an actor, an opera singer and, at one point, wanted to be a painter or sculptor. “But,” he laughs, “I didn’t become those for the same reason I didn’t play center field for the Yankees. Lack of a basic gift.” Instead, Prelutsky drew upon his imagination, literally, and began making sketches of improbable creatures. When he had about two dozen sketches, he realized they needed poems. “In two hours I wrote two dozen little poems to accompany the drawings.”

Prelutsky is an occasional audiobook listener. Right now, he’s trying to teach himself Italian with audio language lessons, and he enjoys listening to Garrison Keillor’s stories. When listening to recordings of his own work, he says, “I get new insights into the poems, things I didn’t realize were there. Just little twists of language. You do take things in differently when you listen to them. There is something about the spoken word that shakes into you.”

Prelutsky hopes youngsters will see some of the beauty and the joy of language through his work. “The language is in trouble. I want kids to realize that there are things beyond television, videogames, and text messaging.” He tries to involve children and never condescends. “Children are not stupid. They’re short. I never talk down. I use words like ‘mucilaginous’ and ‘gelatinous.’”

His new book of nursery rhymes, IN AUNT GIRAFFE’S GREEN GARDEN, due out in May, is a sequel to THE FROG WORE RED SUSPENDERS. Prelutsky tells us that he loves recording and plans to record everything he’s written. With more than thirty-five books of children’s poetry to his credit, Prelutsky’s inventive, musical poems have enchanted children for nearly forty years, and the good news is that he has no plans to stop anytime soon.—S.J. Henschel