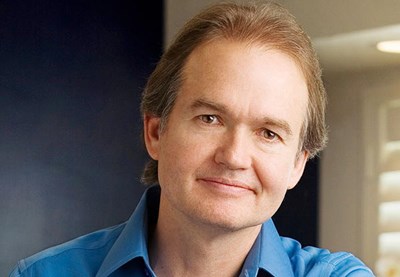 "Gray’s audio readings sound as natural as his live seminar recordings. 'That’s a great compliment because reading was not my forte, but the last few times it’s become easy.'”

It’s surprising to realize that John Gray’s Mars and Venus books have only been with us for 10 years. It seems like he’s been on the personal development scene forever. He was in Chicago doing media interviews for his new book—Mars and Venus in the Workplace—when AudioFile caught up with him and asked him about his background. “I started out being a teacher, teaching Transcendental Meditation during the heyday of meditation, studying with a maharishi for nine years.” Then he decided to go to graduate school in psychology. It was as a therapist that he developed the relationship concepts he taught in seminars and first wrote about in Men Are from Mars, Women Are from Venus.

But the road to the bestseller list was anything but smooth: “I never was a good writer in school, and I had tremendous anxiety about audiences, as well. The first talk I gave, I fainted—I was so nervous. What encouraged me to continue was an interview with John Lennon in which he said that the Beatles stopped touring because he had so much anxiety before performances. I thought if the Beatles can have anxiety, then I can, too. Now after 10 years it’s very comfortable for me. Then writing took another 10 years to become comfortable with.”

Gray’s audio readings sound as natural as his live seminar recordings. “That’s a great compliment because reading was not my forte. I can’t stand being in the recording studio, but the last few times it’s actually become easy for me.” Audio abridgments also test him: “The first abridgment, on Men Are from Mars, it was like tearing out my guts. It’s gone on to sell over a million copies, but when I recorded it, I thought, ‘They’re taking out all the meat.’ If you make a point, you’ve got to build up and develop it, and a lot of the development was just taken out. So I don’t record abridgments myself. I just record the whole book, and they make the abridgment from that.”

Gray’s latest book describes how women and men can learn from each other’s strengths rather than seeing each other as the enemy. “Men have higher levels of testosterone, which tells them ‘I want that; I’m going after that.’ So they’re perceived as wanting to take the ball; they don’t include others, don’t appreciate others. Guys want to be fair, but a world of fairness is not a world of equality. On Venus, they would have everybody get the same salary and everybody take turns doing the same job, and that just will never exist in the workplace.”

Though media portraits of Gray suggest he’s everywhere, he’s only away from his wife and three children four nights a month. Mostly, he’s in his Northern California home office or visiting the Mars and Venus office down the street, where he coordinates a team of counselors, facilitators, and a Web site crew. How does he stay so loose and balanced with all that responsibility? “I’m a big-time meditator. I’ll spend one to two hours a day in meditation, which stimulates creativity. But then you have to give yourself challenges.” With more books about workplace gender differences on the way, and lots of energy when it comes to creating helpful ideas to bridge the gap, he’s likely to stay balanced and productive for years to come.—Thomas Walken