Storytelling is such a natural thing—you don’t need to give a polished performance,” Windham adds, noting the difference between storytelling and performance. “Storytelling should be relaxed, even for the teller.” 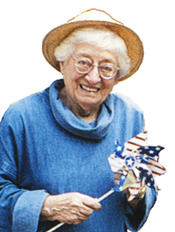 When journalist, photographer, playwright, and actress Kathryn Tucker Windham received the invitation that plunged her into storytelling, she thought it was a joke. A summons to the new National Storytelling Festival in Jonesborough, Tennessee, by a Mr. Smith seemed implausible, Windham recalls, especially since she’d never told stories publicly. “But when a plane ticket arrived, I said, ‘If they’re fool enough to send for me, I’m fool enough to go.’” Today, Windham adds, being invited to the Jonesborough Festival is equivalent to receiving the Pulitzer Prize—and she’s been asked annually since 1974.

Windham recounts stories of her Alabama family and friends from the memory of her heart. “I used a written script once and was miserable,” she says. “Storytelling is such a natural thing—you don’t need to give a polished performance,” Windham adds, noting the difference between storytelling and performance. “Storytelling should be relaxed, even for the teller.”

Now in her 80s, Windham credits her father with cultivating her gift. “He was a great storyteller and encouraged me to notice vocal inflections and unusual words and expressions,” she says. He also paused during his stories to light a pipe, leading his daughter to incorporate moments of silence in her own yarn-spinning. “Sometimes I pause for a natural break in the story, or sometimes I’m thinking of what to say next.”

Listening to Windham recall her Alabama youth, it’s clear she’s mastered the art of storytelling in a comfortable and natural way. Her recordings are the next best thing to a cozy chat with a beloved grandmother. Still, she says her natural pauses bother some listeners. “A man listening to me on Alabama Public Radio thought his radio had gone out when I paused,” Windham recalls. “Then he hit his radio, and I started talking again.”

Windham, who records her stories in the dining room of her Alabama home, is a strong believer in the importance of storytelling and audio. “It changes the atmosphere of a place,” she says. As any good storyteller should, she has an anecdote to illustrate her point. “A friend who lived in San Diego became lost while driving to her new home,” Windham remembers. “She got so upset, she stopped and turned on the radio. I was on National Public Radio talking about her hometown of Selma, Alabama. That helped her get through it.”

Windham welcomes the opportunity to share her tales through audio recordings. “Many people aren’t physically able to come to a storytelling event,” she says. Recently, she heard from a man who gave his father her compact disc recordings for Christmas. “The father is in assisted living, and he could relate to my stories. They brought back his own memories and gave him something to talk about.”

And that is Windham’s whole philosophy of storytelling. “I’m giving people the pleasure of good memories,” she says. “My mission is to encourage other people to preserve their own family stories.”—Jenan Jones Benson