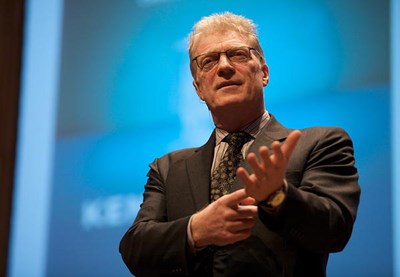 "I rediscovered the book by recording it and felt pleased that the rhythm I’d written into the book actually worked.” 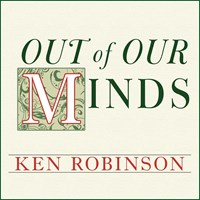 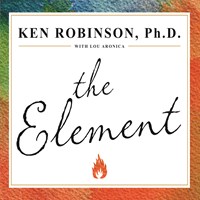 Last year Sir Ken Robinson completed his new book, THE ELEMENT: HOW FINDING YOUR PASSION CHANGES EVERYTHING; recorded the audiobook; and spoke and presented at 80 events worldwide. Robinson found the narration of his audiobook a fascinating experience, but an intense one, with some interesting challenges. “On stage you have other forms of contact and communication with people--your body language, your facial expressions, and the mood of the room. All those things matter. If you’ve just got your voice, you’ve got to give it energy, but not so much energy that it’s exhausting to listen to.”

An innovative educator and visionary, Robinson is well known in the UK for his long career of teaching, speaking, and writing on the development of creativity, innovation, and human resources. His many articles, books, and his seminal 1998 work, “All Our Futures: Creativity, Culture and Education,” known as The Robinson Report, have framed thinking and educational vision for the 21st century. The TED talk was given in June 2006 and is available as a video (www.ted.com/talks/ken_robinson_says_schools_kill_creativity.html). Robinson’s talk has been viewed and downloaded more than five million times.

Robinson recorded THE ELEMENT at Tantor Audio’s Connecticut studios. “It was an interesting journey. I rediscovered the book by recording it,” he said, “and felt pleased that the rhythm I’d written into the book actually worked.” Robinson kept in mind that the book would be listened to by individuals with headphones on, rather than collectively in a group, but it took a while to get the feel of it. “When I give a talk, I have a pretty clear structure in my head of where I’m going to get to. And it’s like jazz, as I then feel free to riff on it.” In the word-for-word recording, the structure is inevitably different as the book sets out arguments for people to follow, and the narrator must follow exactly. No riffs. “The key thing for me is keeping the audience interested and engaged.” THE ELEMENT allowed Robinson the structure and the depth to explore some of the ideas from the TED talk and “really take them for a walk.”

Throughout the book there are transcripts of direct quotes from actress Meg Ryan, gymnast Bart Connor, author Paulo Coelho, architect Zaha Hadid, and artist Faith Ringgold, among many others, as Robinson uses their stories to illustrate the many ways that people think, learn, and succeed differently. Dealing with the transition between direct and indirect speech was tricky, and the use of “he said” or “she said” was essential. The use of the many profiles provides diversions from the urgency of Robinson’s call to reform. His 2009 Los Angeles Public Library program, for example, was given the blog topic of “Do Schools Kill Creativity?”--a sure attention-getter.

As a reigning authority on multifaceted intelligences and creativity, Robinson’s comments on the virtues of audiobooks could put to rest any lingering concepts of audiobooks as shortcuts, or cheating. “We learn in all different sorts of ways, and have relative strengths and weaknesses. Some people take in information much more vividly by hearing it, rather than following it on the page. For some people it’s a faster, and more evocative, way to get the ideas, to get the information.”--Robin F. Whitten