“I was driving to California, and I bought my first audiobook, Cormac McCarthy’s THE CROSSING. I popped it in the cassette player, and I was gone. I was totally absorbed. I don’t know how my car got to California. I was so entranced that my car ran out of gas as I arrived in California, and I could not have cared less. I just pulled to the side of the road and walked into a cornfield to watch the sunset. You see, at the end of his book, the sun is setting, and there I was at the end of my trip watching the sun set.” 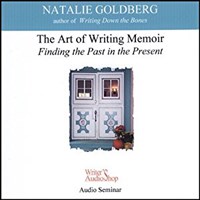 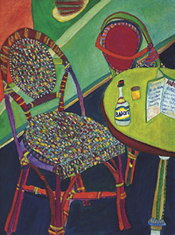 Natalie Goldberg started something big when her now classic book on writing, WRITING DOWN THE BONES, was published over ten years ago. Meditation studies with Zen master Katagiri Roshi had led her to develop a method of “writing practice” as a way of “awakening the hidden speech of the mind”—or writing down the bones.

“When the book first came out, I got letters from people from all walks of life —real estate agents, factory workers, lawyers wrote to me.” Goldberg had opened the craft of writing to everyone. As she says “Everybody has a secret desire to write. A desire to connect with ourselves.”

Recently, Goldberg teamed up with Sounds True to record an audio edition of WRITING DOWN THE BONES. In addition to reading her work, Goldberg concludes each chapter with new commentary. “It made me very alert when I read the chapter; my mind couldn’t wander.”

“It was fun for me because I hadn’t read it in a long time. You don’t often get a chance to digest your own material in that way and so many years later. I was 36 when I wrote it and 50 when I read it. It was fascinating to meet the 36-year-old. I say sometimes in the commentary, for example, ‘Well what she says is completely correct, but I wouldn’t do that now!’”

Does she remember the 36-year-old Natalie with affection? “Oh yes. Mostly, though, I remember her energy, I remember youth! I remember how much I believed in BONES, how much effort it took to write. It was my first book. I had been a poet for 13 years, and I was afraid. Now all that stuff about writing together, writing in cafes, seems ordinary—but I was breaking the crust by saying those things. I was afraid that people would think I was a lunatic. Also, in your first book you’re afraid to come out with who you are—you’re dying to and, at the same time, you’re scared.”

She can summon the details at will. “I was living on Don Cubero in Santa Fe [New Mexico], living on unemployment, working part time as a baker at a little restaurant, and working on this book. When I was reading the book for Sounds True, I could go all the way back to that living room on Don Cubero, where I had my Smith Corona electric typewriter set up in front of the window. I would type along thinking I was writing a great book, then thinking I was an idiot.”

Clearly, she was not an idiot, for in addition to inspiring people from all walks of life to pick up a pen, BONES is used as a college textbook in visual arts, dance, and even science classes. “After all, I’m talking about the human mind and how it moves. So BONES applies to everything.”

Goldberg is particularly pleased with the exclusive interview that appears at the end of the tapes. “Tami Simon’s interview was really good; she pulled stuff out of me that no one else has ever asked. It brings the whole thing alive.”

In addition to the commentary and the interview, the BONES package includes postcards of two of Goldberg’s colorful paintings. “I love that we put in the postcards; we intended them as a gift to the listener. Painting has become an important part of my whole practice. The triumvirate: Zen, writing and painting.”

Natalie Goldberg the writer is a passionate reader, who also knows firsthand the power of audiobooks. “Five years ago, I was driving to California, and I bought my first audiobook, Cormac McCarthy’s THE CROSSING. I popped it in the cassette player, and I was gone. I was totally absorbed. I don’t know how my car got to California. I had a Honda, so I say that a Japanese car god carried me safely there. I was so entranced that my car ran out of gas as I arrived in California, and I could not have cared less. I just pulled to the side of the road and walked into a cornfield to watch the sunset. You see, at the end of his book, the sun is setting, and there I was at the end of my trip watching the sun set. So, audiobooks are wonderful . . . but be careful when you’re driving!”

What’s next for Goldberg? “Reading Bones for Sounds True has made me urgent again.” After delivering her newest book, THUNDER AND LIGHTNING, to the publisher, she will team again with Sounds True to record LONG QUIET HIGHWAY her homage to Zen master Katagiri Roshi. This summer, Goldberg will teach her usual writing workshops at the Mabel Dodge Lujan house in Taos, New Mexico, for which she has established a scholarship fund and a fellowship for people of color. In the fall, she will be writer in residence at Antioch College in Ohio. And beginning next year, she returns to Minnesota to advance her Zen practice in the very Zen center where she developed the ideas for WRITING DOWN THE BONES. Who knows what might happen this time?—Aurelia C. Scott