“As a mystery writer, my goal is to tell a great story-—one with an intriguing, suspenseful plot; well-developed, layered characters; and credible motivations.” 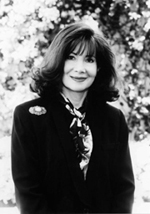 It was three o’clock Friday afternoon when AUDIOFILE sat down with Rochelle Krich in the lobby of the Austin, Texas, Renaissance Hotel. She was attending Bouchercon, the World Mystery Convention, at which her story “Bitter Waters” was nominated for an Anthony Award in the Best Short Fiction category. She had two hours before she needed to head to her room to prepare for the Sabbath. Keeping kosher and observing the Sabbath might seem daunting for a woman on a two-month cross-country book tour, but Krich is up to the challenge with a graceful smile.

Krich’s first novel, WHERE’S MOMMY NOW (1990), won the Anthony Award for Best First Novel and was adapted by Hollywood as PERFECT ALIBI, starring Teri Garr, Hector Elizondo, and Kathleen Quinlan. Since then the former high school English teacher has published five police procedurals featuring LAPD Homicide Detective Jessie Drake and five stand-alone suspense novels, including TILL DEATH DO US PART, SPEAK NO EVIL, and FERTILE GROUND. Her eleventh novel, BLUES IN THE NIGHT, launches a new series featuring Molly Blume. It also marks her first novel to be adapted for audio, available in abridged and unabridged formats from Brilliance Audio.

“As a mystery writer,” she told us, “my goal is to tell a great story-—one with an intriguing, suspenseful plot; well-developed, layered characters; and credible motivations.” Her face took on a glow as she talked about books and storytelling. “I grew up on reading. My mom and I used to spend Saturday mornings reading together—not to each other but each reading our own books. That was our routine, and I found it wonderful. I’m sure it encouraged in me the love of reading.”

Sound is a key element in Krich’s writing process. “When I’m writing dialogue, I like to hear the conversation. I think it’s important to read dialogue aloud. What looks wonderful on the page may not sound the same when you’re reading it. Dialogue has to have a rhythm.”

In BLUES IN THE NIGHT, true crime writer Molly Blume—sort of an Orthodox Jewish Nick and Nora Charles (currently unattached, doesn’t date rabbis, or so she says) probes into the world of postpartum illness while investigating a hit-and-run incident. Molly’s grandmother, “Bubbie G.,” being a font of Yiddish wisdom and humor, provided a challenge for the audiobook production. “The reader, Deanna Hurst, was familiar with some of the terms, but not all. We spent time going over the pronunciation. There was one Polish phrase, and I put Deanna on hold and called one of my parents’ friends, and I had her pronounce the phrase several times for Deanna.”

Has Krich always been a fan of spoken word audio? “No. In fact, that’s very interesting. My father died in May, and according to Jewish law, one should avoid listening to music in the year following the death of a parent. I live in Los Angeles and spend a lot of time in the car. You can only listen to so much talk radio. So out of this profoundly sad event arose a whole new listening experience for me.”—Steven E. Steinbock