"Hearing the emphasis and emotion the actors bring to the book makes the work feel fresh—almost like I'm hearing something brand-new." 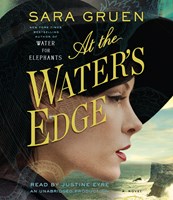 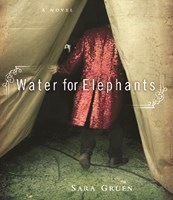 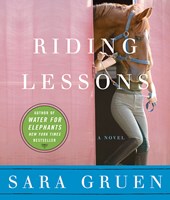 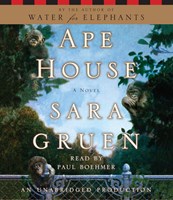 The animal that Sara Gruen is most associated with is a pachyderm. Next to that might come bonobos. In her most recent book, however, the author of the bestsellers WATER FOR ELEPHANTS and APE HOUSE has placed a mythological creature at the center of her plot. That would be the Loch Ness Monster.

In AT THE WATER’S EDGE, published earlier this year, a Philadelphia socialite named Maddie Hyde accompanies her husband, Ellis, and his best friend to Scotland to search for Nessie (as the monster is often affectionately called) in 1944, as WWII rages around them. The men have been excused from military service for medical reasons, and the trip is intended to vindicate Ellis’s father, who several years earlier was accused of passing off fraudulent photographs of the monster as real ones. The horrors of war, class differences, friendship, and romance are among the issues Maddie faces.

Gruen’s interest in the Scottish topic was triggered when she came across a 1938 letter by a Scotland Yard official who had no doubt the monster was real. She recalled her own fascination with the creature during a visit, when she was 12, to Urquhart Castle, which sits beside the large lake called Loch Ness.

A return visit was in order, and Gruen spent five weeks doing research--reading old newspapers, interviewing people, picking up bits of Scottish folklore-- and trying to figure out exactly what her novel would be about. “I went in February, a time when most people are trying to get out of Scotland rather than in, which meant that there were very few tourists at the places I visited,” she says. “The first breakthrough moment for this book happened when I was in Urquhart Castle. The only other person there was my guide, and all the little tidbits I’d taken note of began to take the shape of a story. As it happened, I was standing at the Water Gate, literally at the water’s edge, and I sent my guide back to his car and spent the next couple of hours stomping around the castle by myself dictating notes into my phone. I’m sure I looked like a madwoman.”

One important fact she discovered was that Scotland was much more involved in WWII than she had previously realized. “For example, the D-Day landings were practiced there, and the modern-day commando came into being at Achnacarry Castle, which became known as Castle Commando.” German bombers flew over regularly, too. “Also having the war as a backdrop provided an element of imminent danger, allowing me to ratchet up the tension in all sorts of areas.”

When she listens to the audiobook versions of her books, the characters in a sense come to life all over again. “I see and work on the words in the written form for so long that the rhythm and inflection are really set in my head. And hearing the emphasis and emotion the actors bring to the book makes the work feel fresh--almost like I’m hearing something brand-new.”

Her acute listening skills may be part of her musical background. Both her parents were musicologists, and she started out as a music major, playing the violin. Sometimes she listens to music as she writes, she says. “For this book, I listened to a lot of traditional Scottish bagpipe music as well as 1940s popular music, and by the end of it, my two parakeets could perfectly mimic the bagpipes.”

Parakeets? Perhaps not surprisingly, Gruen lives in a house filled with animals. “Currently we have three dogs, four cats, two horses, a goat, and two birds. When I get home from my [book] tour, we’re adopting a fifth cat, a geriatric cat whose elderly owner passed away. The number is always in flux because my stepdaughter is a vet and has a soft heart and she knows I do, too.” Certainly, she has a soft heart for Nessie.--Aileen Jacobson