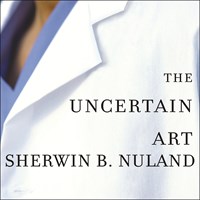 Talking with Sherwin B. Nuland 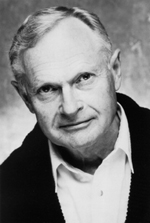 Sherwin B. Nuland, clinical professor of surgery at Yale University and a prolific writer on medical and bioethical matters, has never listened to an audiobook other than the ones he’s narrated—namely his own. Reading those texts, including HOW WE DIE and THE WISDOM OF THE BODY, has come easily to him until now.

Nuland’s story is subtitled “A Journey With My Father,” a phrase that pinpoints both the underlying tension of the book and the role of its other key player—on an equal footing with the narrator—in the dysfunctional, female-dominated, Yiddish-speaking, Depression-era four-room apartment in the Bronx that the author called home.

Read unabridged, Nuland’s book is dappled with picaresque boyhood adventures and memories. More frequently, though, it brims over with stark descriptions of the sheer contentiousness, heartache, and pain—both physical and emotional—that Meyer Nudelman, the author’s father, brought to the household. And in the shadows of that existence lay family secrets that emerge only near the story’s climax. In the wake of writing and then reading the text, the wounds remain unalterably raw for the 71-year-old author-educator.

“My way of writing is essentially free-associating. I’m really talking to myself in my head when I’m writing. Now I was going through it again, this time narrating it. I happened to have a director who had a sense of understanding and sympathy. He could see what I was going through. From time to time, he would say to me, ‘Do you want to stop for a while?’ Which I did, each time he asked.”

With the writing, and now the narration, complete, is the author comforted by the thought that he may have achieved some degree of closure, more than forty years after his father’s death?

“I reject the word,” he bristles. “I don’t think it exists. I think we go on making progress, always in a spiral, going upwards and making things better—but never reaching that destination of closure. People will say, ‘I want to get on with my life.’ Well, you don’t get on with your life, because everything that has happened remains part of your life. The past is never past.”

Then how does he characterize his relationship with his father in his psyche today?

“You reach an equilibrium. In a real equilibrium, there’s always a back-and-forth. It’s active, not static. That’s where I am.”

And what of the Bronx? Has the surgeon ever returned, even briefly, to his roots in the once-teeming Jewish enclave?

“I was there last May. I went back to 2314 Morris Avenue. I rang the doorbell of my old apartment. Mrs. Valdez let me in. I went to my old library. I told them who I was, and they took me right to the shelf where HOW WE DIE was. In my old library, there was my book. Can you imagine what that felt like?

“Then I went to a bodega and got a sandwich.”—Michael J. Bandler