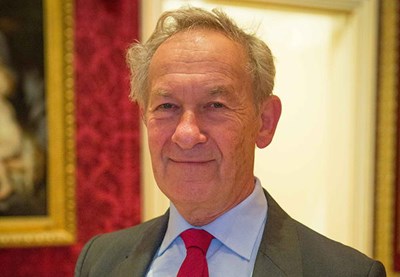 “Early histories, Thucydides, for instance, were written to be spoken.”

Few Americans know anything of the history of the slaves who joined the Tories during the Revolutionary War. Excluded from the liberty their masters so prized, they fought for England. The English, unlike the Colonists, promised manumission to slaves who would take arms in their cause. A monarchy that offered freedom seems to have been infinitely more attractive than a democracy that did not.

In writing of a long-neglected and less than glorious phase of America’s past, Simon Schama has picked a fight with the sentimentalists of his adopted country—which seems to please him immensely. “I was at pains to avoid unseemly British self-congratulation,” says the man who has lived half his life in the United States. “My book tells the stirring, but ultimately tragic, story of the men who chose treason over bondage. They fought heroically in the war and then attempted to settle in Nova Scotia and Africa. Abetted in these efforts by forward-thinking English philanthropists, they nevertheless had a dreadful time of it, during the war and afterwards.”

Although Schama has narrated his own HISTORY OF BRITAIN for the BBC and is at work on THE POWER OF ART for PBS, he has never—before this abridgment—recorded an entire book. “It’s such a strenuous thing to do,” he says. “It reminded me of those old BBC recording studios where you’re not merely deprived of light, but of any air . . . at all. You feel like one of those people attached to hoses in THE MATRIX, a sort of really unnatural environment.”

Yet he expects to do it again. “I think it’s a bit like childbirth actually. You wonder how people carry on doing it again and again,” he says, laughing. “The answer is because they forget the pain.”

It may also be that the man who recited Shakespeare as a 9-year-old has a keen and multifaceted understanding of the value of the spoken word. “Early histories, Thucydides, for instance, were written to be spoken,” he muses. Schama’s admiration for oration is also personal. “My dad used to read Dickens to the family in the living room ‘lounge,’ as we called it. And my father was on soapboxes in the ’30s and was regularly beaten up by Black Shirts. He’d say a Jew’s weapon is his mouth.”

When chided for asking rhetorically why so few of the American slaves who fought for England during the American Revolution have been recognized for their accomplishments, he laughs merrily. He didn’t, he declares, really expect Americans to celebrate the lives of those who—however understandable their motives—fought against the revolution.

Reading the book may be tough, Schama admits, for those who think there was a kind of golden moment called 1776, “when all our leaders were virtuous, wise, courageous, and, on the whole, white. But then I’m somebody for whom history, since Thucydides, has essentially been tragic. Its grandeur is the grandeur of facing the truth.” History, Schama says, is not “a security blanket. Not a lullaby or a consolation for the difficulties we face now. Its value is to force tough self-examination, because you can’t just make things up.”—Benjamin Cheever