“The first story I ever heard on vinyl disc was when I was a kid. I took a dramatic version of THE COUNT OF MONTE CRISTO out of the library. I’m telling you, I almost memorized it. I listened to it again and again." 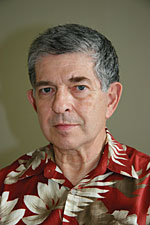 “What makes me an effective storyteller? That’s a good question,” says Stuart Kaminsky. “I don’t know. I’ve loved stories since I was 12 years old. I loved movies. I loved radio. I loved reading. I always read, and telling stories was what I wanted to do. My mind was always overflowing with stories.”

Kaminsky manages to keep many balls in the air with multiple successful series, including novels about Sarasota process server Lew Fonesca, Chicago detective Abe Lieberman, Inspector Porfiry Petrovich Rostnikov of the Moscow Special Crimes Unit, and 1940s Hollywood P.I. Toby Peters. He has also written several original “Rockford Files” novels and “CSI: New York” novels. He has served as president of the Mystery Writers of America, won an Edgar in 1989 for his novel A COLD RED SUNRISE, and was the 50th annual recipient of the Grandmaster for Lifetime Achievement from the Mystery Writers of America.

Growing up in Chicago, Kaminsky went to the movies as often as he could. His family often attended the Yiddish theater, which he says shaped his sense of story. He was also a big fan of radio. “Radio,” he says, “had great voices, like Alan Ladd and Ted de Corsia. I wish they were around to do audiobooks. Wouldn’t it be great to hear James Mason narrating a new book?” Recalling the “Edgar Bergen and Charlie McCarthy Show,” he confides, “Bergen was a terrible ventriloquist, but he was a great comedian, and was great at those voices. He was made for radio. Remember Tommy Riggs? He did a radio show and did voices for it. He was really good.”

Kaminsky has been listening to audiobooks since long before the term “audiobook” was coined. “The first story I ever heard on vinyl disc was when I was a kid. I took a dramatic version of THE COUNT OF MONTE CRISTO out of the library. I’m telling you, I almost memorized it. I listened to it again and again. I don’t remember who read it. I’d like to think it was Robert Donat, but it wasn’t. I remember listening to some of the old Caedmon recordings: William Saroyan, Eudora Welty. It was a treasure to hear Eudora Welty reading ‘Why I Live at the P.O.’”

His current audiobook tastes run to mysteries. “I like all the Rumpoles. I’ve listened to all of those. I like Hugh Fraser doing Inspector Poirot. I like Elliot Gould doing Raymond Chandler. I guess my absolute favorites are Lisette Lecat doing the Alexander McCall Smith books. I listen to a lot of short story collections. You pick up some real gems in those. Right now I have the first Harry Potter book in the car.”

The secret of keeping a series alive? “I just let my imagination kick in. It’s pretty much the way I’ve operated from the beginning. I create the characters. I just listen to them and watch what they’re doing. And it works. If I can’t make a character my own, if I can’t get them to start living, that would concern me. But that hasn’t happened yet.”--Steven E. Steinbock