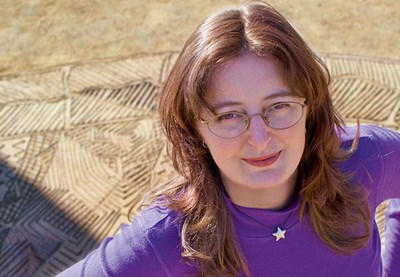 "Canavan often listens to audiobooks while working on her loom. It turns out that in addition to weaving tales of fantasy, she also weaves fabric."

Trudi Canavan’s name came to the attention of the literary world when “Whispers of the Mist Children” won the 1999 Aurealis Award for Best Short Story. Her novel MAGICIAN’S GUILD (2001)--the story of a young slum dweller in an alternative realm who discovers her own magical potential--launched her first trilogy and established her as an up-and-coming novelist. She currently has published more than a dozen novels, including four separate trilogies. Her books have been translated into German, Dutch, Italian, Polish, Portuguese, Czech, Danish, and French.

“Growing up in the suburbs of Melbourne, Australia, Trudi was a voracious reader. She had read so many of the books in her school library that the librarian had a difficult time finding anything for read-aloud that Trudi hadn’t already read. The librarian eventually invited Trudi to tell a story of her own to her classmates. The story she invented was her own twist on “The Little Mermaid.” In telling the story, she learned a lesson that has kept her in good stead ever since: that one of the secrets of developing a story is to take an established theme or motif, give it her own unique twist, and then deepen and expand the psychological elements so that the characters become real.

Canavan leads a busy life but still finds time to listen to audiobooks. In addition to listening during long car rides, she often listens while working on her loom. It turns out that in addition to weaving tales of fantasy, she also weaves fabric. “I weave on a rigid heddle and four-shaft table loom, and both produce mostly flat, rectangular pieces of fabric, so I make things like scarves, shawls, blankets, and floor rugs.” Although her craft is intricate, there are often “non-thinking parts of big weaving projects” that provide a good opportunity for audiobook listening. Over the years her other hobbies have included woodworking, pottery, and fencing.

When we asked about the difference experiences of reading versus listening to stories, she explained, “I find that when I read, I hear the words as a voice in my head. While that voice may be young or old, male or female, it will be similar to my own voice. It won’t have an appropriate accent for the character or be much higher or lower in tone than my speaking voice. Of course, audiobook narrators have a limit to their range as well, but they’re much better at getting character voices right than those voices in my head. Sometimes a narrator adds drama to a scene or fleshes out a character in the way they read, bringing more excitement and empathy to the words.”

Canavan observed that some books are better suited for listening. “The sound of voices can make me sleepy, which is not a problem with reading, so I’d rather listen to a fast-paced story and read a slow one. I also find that the way the narrator relates to the listener can affect the experience. Some are like a friend telling you about something that happened to them.”

Richard Aspel has narrated a number of the unabridged adaptations of Trudi Canavan’s books. In addition, Canavan said, “Kellie Bright and Samantha Bond narrated the abridged version of the Black Magician Trilogy and Age of the Five Trilogy, and Sarah Douglas recorded the unabridged Age of the Five. All sound wonderful. My new book, THIEF’S MAGIC, has two protagonists that share equal time in the story, so Bolinda hired two narrators: Grant Cartwright and Hannah Norris. I haven’t yet received copies or heard the result, but I think it’ll be fabulous and enhance the listening experience.”

We asked Canavan what she thinks is her strongest asset as a storyteller. “I suppose it’s the ability to become a character while writing in their point of view. Many writers describe their relationship with characters as a conversation--they literally have mental chats with them, and are writing their character’s story down. But I don’t feel as if the character is a separate entity, at least not while I’m writing in their point of view. Characters can be interesting and the setting fascinating, but if the pace and style of the writing drags, the reader may never get far enough to discover either.” Good fiction requires momentum. “The most important element of telling a story,” Canavan told us, “is narrative drive.” Without this drive, there would be no reason to read--or listen to--fiction. As the legion of Canavan’s fans confirm, her stories are filled with drive.--Steven E. Steinbock