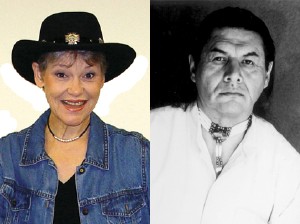 It's no surprise that two of America's outstanding storytellers came by their talents honestly: through their families. After all, the oral tradition preserved history long before books as we know them were born.

Joseph Marshall says storytellers were plentiful on the Lakota reservations where his grandparents lived. "My primary inspiration was my maternal grandfather, Albert Two Hawk," says the New Mexico resident whose Lakota tales of life and its lessons are much admired.

For Southwest yarn spinner Barbara McBride-Smith, the link is even more intense. Although much of her immediate family is deaf, storytelling, in both spoken and sign language, was a prime mode of communication and entertainment during her childhood. "I was born talking for everyone who couldn't," she says. "I learned [from her sisters who are deaf] how to speak with my whole body."

Marshall and McBride-Smith agree that recording in a studio allows for a perfect performance but lacks the spontaneity of capturing live storytelling. "I feel I give a better performance when I'm recorded live," McBride-Smith says. She adds that audience feedback and natural sounds from the venue allow future listeners to feel as if they're face-to-face with the teller. "Live and recorded telling are really different art forms."

These performers draw on their personal experiences and histories, as well as oral traditions in Native American lore (Marshall) and Greek mythology (McBride-Smith). Both believe that storytelling is a crucial link to the past and are grateful that modern technology can preserve time-honored tales. "Today it is necessary to record as many stories as possible, given that we don't have as many oral storytellers as we did in past generations," Marshall says. "Any story that is remembered or recorded offers insight into some aspect of ourselves as human beings within the diversity of cultures that were and are." Both performers see a clear distinction between audiobooks and recorded storytelling. They say since stories are told rather than read, the result is more free-form and conversational.

McBride-Smith, an elementary school librarian, enjoys listening to mysteries and humor while traveling by car. She says that until she began recording her tales, she was unaware of narrators' names. "Now I understand how important it is to recognize narrators. I really appreciate hearing a true Southwest accent; I know a fake one when I hear it," the Waco, Texas, native says.

"Strangely enough, I haven't listened to a lot of audiobooks," says Marshall, who is also an actor and author. "The last one I heard was my friend Claudia Pinkola Estes's book on the theatre of the Imagination. In a way, I think I prefer to listen to storytelling straight from the source."

McBride-Smith agrees that both recorded and live storytelling are valuable experiences for listeners. "The recorded version is like a telling to one person and more intimate than a live telling. On stage, the story blossoms out and expands; the words are the same, but feel different," she says. "Once someone hears recorded storytelling, I hope they'll seek out live storytelling and compare them. I'd like to inspire that experience."--Jenan Jones Benson