"Bradley is a voracious reader, usually reading two or three titles at a time. He listens to six to eight audiobooks a year, mostly while driving or puttering around.” 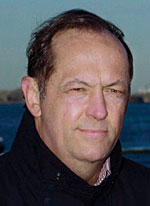 Former New Jersey senator and professional basketball player Bill Bradley is concerned that Americans feel powerless to change things, that they feel overwhelmed by society’s problems. “It didn’t used to be that way in America,” he says. “The story of America was one of action, of hope, of initiative, of problem solving. And today, people can recover those qualities if they become a part of what I call the new American story.”

Bradley admits that for much of his career he had “no authentic political voice,” campaigning not to change things but to please people--supporters, contributors, and undecided voters. “It was only after a close race in the 1990 Senate race in New Jersey that I began to speak from my gut as well as my head.”

After his unsuccessful presidential run in 2000, Bradley got out of politics, and this book is written from that perspective. He is hard on both parties, particularly the hidebound factions in each that refuse to compromise for the greater public good. He says, “I’ve got no ax to grind and no political ambition to accomplish.”

Talking with Bradley can be part political science lecture and part revival, but without the soaring voice of the revivalist, only soaring ideas. Bradley lets his words do the talking, so to speak. He remembered with humor an incident that occurred after he recorded an abridged audio version of his book TIME PRESENT, TIME PAST. “Radio commentator Don Imus selected a snippet that captured me sounding at my worst and replayed it over and over and over--to show how dull I was.”

He can laugh about the incident, but he believes it points out one of the problems with the American political system. There is a greater emphasis on form over substance, style over content, sound bite over detailed discussion.
Not surprisingly for a man who refused basketball scholarships in order to attend Princeton, Bradley is a voracious reader, usually reading two or three titles at a time. He listens to six to eight audiobooks a year, mostly while driving or “puttering around.” In general, he prefers histories.

Bradley doesn’t consider listening to audiobooks to be the same as reading. “Listening,” he says, “you can gain content, but it’s hard to make the same emotional connection that you do with a printed book. You don’t pause on a moment. Because there’s a voice [in an audio version], it’s less intimate. A lot of times when you’re reading, you’re putting your own voice into the book.”

Bradley believes that his current book works in either format in that it is the ideas that are important, not the literary style. “The book is an argument. You can read a chapter and have it stand on its own, but the design is for it to be cumulative, to empower people. You can disagree with me. Fine. Let’s discuss it."

“These are issues that all people care about,” he says, his voice building with emotion. “But do people have the staying power to listen to that argument? As citizens, we are in control of our future. An awakened citizenry can command the government to do what they want it to do. But it’ll take action and involvement and information.
“The American people are ready for the truth that’s most important to them.”--Richard C. Gotshall