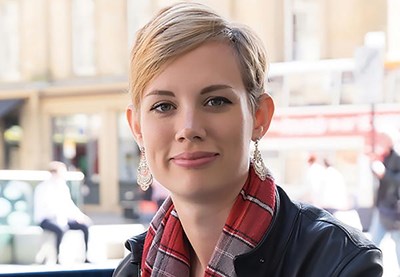 "Having modeled on the oral storytelling tradition, Banner always heard the novel as a reading-aloud experience." 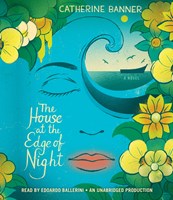 Once upon a time in a village in northern England, a literacy teacher named Catherine Banner discovered that her students learned to read more easily if they listened to the audio of a book in the classroom while following along in their written copies. She had tried reading aloud to them herself, but as she says, “I couldn’t do the voices, and with a good audiobook, the students really learned the words.”

Then she discovered that her commute to work became pleasurable if she, too, listened to audiobooks. Long books were particularly good--Hugo’s LES MISÉRABLES, for instance, or A HISTORY OF THE WORLD, by Andrew Marr.

Finally, she wrote her own book, named it THE HOUSE AT THE EDGE OF NIGHT, and an audiobook was made of it. Her very own audiobook.

When Penguin Random House Audio asked whom she’d like as the narrator, she thought, “This is the first time I’ve had an audiobook. I mustn’t ask for someone specific.” So, instead of requesting Edoardo Ballerini, whose work she loves, she wrote a convoluted email asking for “an old-fashioned storyteller who could do all the characters and changes in eras, and who is comfortable with Italian words.”

In reply, the producers said they’d hired Edoardo Ballerini. She told them that was “brilliant.”

While THE HOUSE AT THE EDGE OF NIGHT is Banner’s first audiobook, it’s actually her fourth book. Her first three, all YA fantasy novels, were written and published when she herself was a young adult. “I’m lucky to have had what amounted to a ten-year apprenticeship,” she says. “Being taken seriously, working with an editor, watching my work pulled apart, and being told that I could make it better was invaluable.”

After her third book, she found that she’d written herself out. So she went off to university and trained as a teacher, not sure if she’d ever pick up the proverbial pen again. Instead, she taught English and literacy in a small ex-mining town, lived in another small town, married an Italian, and visited small Italian towns. When the 2012 financial crisis hit, it devastated the communities she’d come to know.

“There’s a story here,” she thought. Not a business-oriented book, but the tale of life in a small place on the edge of Europe, a place buffeted repeatedly by the winds of big historical change.

“As I planned the book, I wondered what kind of voice would do the story justice,” she says. “I wanted the style to reflect the way the characters think. I was influenced by how the children where I taught have these bodies of legends that they tell about things that happened a long time ago, and things that happened last week.”

Pondering this, she rediscovered the magical-realist writers--Salman Rushdie, Isabel Allende, Gabriel Garcia Marquez, and others. “Here was a way of writing about history that isn’t an empirical, logical record of what happened. Instead, it is the story we tell about history as it happens to us--the personal, alternative history.”

Writing in northern England, she gained distance and perspective by setting the novel on fictional Castellamare Island, off the coast of Sicily. It isn’t a real place, but it is realistic. “I wanted it to feel specific and Mediterranean, so that the reader would almost look it up on a map, but not quite.”

Having modeled on the oral storytelling tradition, Banner always heard the novel as a reading-aloud experience. She laughs, “I even created most of the dialogue aloud, first in Italian, then in English. It probably worried my neighbors as I walked by!”

Speaking aloud brings us back to the audiobook.

When the audiobook CDs arrived, Banner was excited and understandably nervous. She decided to listen to just enough of it to “hear what Ballerini had done.” However, once she began, she couldn’t stop.

“For a writer, by the time your book is published, you can’t really reread it and see the words on the page any more,” she explains. “You can’t have the experience of thinking like a reader. But Ballerini’s narration was so perfect that it was uncanny. Hearing my novel brought it to life and gave it back to me.” She pauses to think for a moment, then adds, “Do you know--listening to it was my last experience with the book. I’m so grateful.”--Aurelia C. Scott