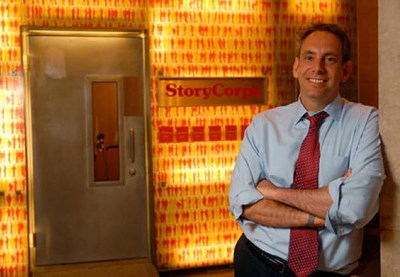 "Isay gets his listening skills from a lifelong belief that the stories people tell about their past should be documented, and for him that action is an act of love. " 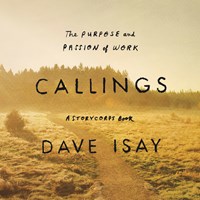 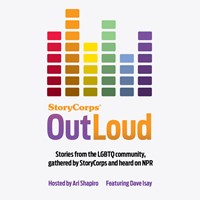 “When I was 13, I interviewed my grandmother and her sisters,” says award-winning radio documentarian Dave Isay. “My grandmother was this larger-than-life character. When I was 15, that whole generation died, and at 17, I went looking for the tape and I couldn’t find it. Now, some 24 years later, I go to my parents’ house and look for that tape again. It’s never going to show up. If there were a tape I would value over any other, it would be that one. One of the reasons I created StoryCorps was to make sure no one else will have that experience.”

Isay says StoryCorps started in Grand Central Terminal in New York City in October 2003. It consists of a small soundproof booth, two microphones, some simple recording equipment, and several people, usually a grandparent or parent and his or her children or grandchildren. “Most people ask questions like ‘what are the most important lessons you’ve learned in life?’ or ‘how do you want to be remembered?’ Most people start crying the moment after the CD begins to roll.”

Isay says the key to getting the best from the storytellers is the job of the other person in the booth. “The facilitator has an incredibly difficult job. We hire a new group every year, in part because it’s so draining. But we get hundreds of applications for each position, and we choose people just because they strike us as great listeners, and there’s a look in their eye.”

At the end of the session, two CDs are burned; one stays with StoryCorps and goes to the Library of Congress, and the other is given to the participants. “There’s something about the formality of the recording process and the knowledge that this record will last forever that makes people reveal important events in their lives.”

StoryCorps is the fastest-growing nonprofit organization in the country, and its success is Isay’s most satisfying professional accomplishment. “It’s been the most amazing experience of my life to see how people have taken to this. People travel hundreds of miles and drive eight or nine hours to become a part of it.”

Isay gets his listening skills from a lifelong belief that the stories people tell about their past should be documented, and for him that action is an act of love. Isay’s initial success came over 15 years ago when he gave inner-city youngsters in Chicago’s toughest housing projects cassette recorders, allowing them to tell the stories of their daily lives. Those tapes were edited and played over National Public Radio. The NPR connection continues with StoryCorps excerpts played each week.

But why do people reveal such personal secrets, knowing that millions of people will hear them? “None of us want to be forgotten, and all of us want to be heard,” Isay says. He points to our current culture of celebrity. “So few are the focus and do so little with the fame they have. The stories of everyday people are the most interesting.”

Taking the long view, Isay says, “History is usually told through the voices of statesmen and politicians, but I think understanding what it was like to live through the twentieth and twenty-first centuries through our voices and our stories will be very valuable--and give a whole new texture to people’s understanding of history.”--Randy O’Brien