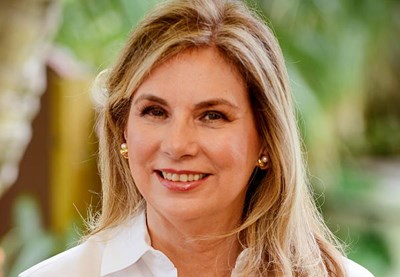 “Audiobooks gave me an immediate audience to play to. I kept watching for the studio engineer’s reaction. If he was not reacting, then I’d figure there was something wrong with my reading.”

Being a syndicated columnist isn’t always what it’s cracked up to be. Then again, sometimes it’s a whole lot more. Take Elaine Viets, for example. This St. Louis native has taken her syndicated column from profane to sacred and back, and has found time to pen four mysteries. Her writing is witty, sexy, and on-the-edge—all the while managing to come across as homespun. Ethnic culture—with its cuisine, community, and kitsch—are interspersed with male strippers, female impersonators, bikers, bad medicine, and murder. Viets describes her fictional hero, Francesca Vierling—who has appeared in BACKSTAB, RUBOUT, PINK FLAMINGO MURDERS, and DOC IN THE BOX—as “a six-foot tall columnist with dark hair, a smart mouth, and who is generally in trouble with the newspaper management.”

Viets, like her fictional counterpart, has had more than her share of news stories “killed”—yanked before publication—by overzealously prudish editors. Viets gathered the best of her banned columns into the book Censored Viets, which was produced as an audiobook by Wildstone Audio. Wildstone also published audiobook versions of Viets’s two irreverent self-help books, HOW TO COMMIT MONOGOMY, a humorous look at marriage, and HOW TO SURVIVE THE HAPPIEST DAY OF YOUR LIFE, a wedding planning guide for brides-to-be. Viets was narrator/performer on all three of these audiobooks.

The author recently hunkered down in Albuquerque’s John Wagner Studios to record her four “Francesca Vierling” mysteries. Listening to audiobooks may be relaxing, but reading them into a microphone, the author admits, is hard work. “I read for six or eight hours a day and felt like I’d been digging ditches. First, I worried about whether I was keeping up my energy, so listeners would stay entertained. Then, there are the physical problems. I either had a mouth full of spit that I couldn’t get rid of, or it felt dry and scratchy as a gravel bed.” Also, she admits that she learned the hard way “that I had so much tongue-tripping alliteration in my novels.”

Viets is a natural-born storyteller who can take the absurdities and commonalities of everyday life and weave stories around them. “I’m able to communicate with readers as equals. That’s the only way to tell a story,” she told us.

Narrating her audiobooks added a new dimension to the experience. “It was a really heady experience to read my own work and tell people my story, the way I hear it.” The word processor and the microphone are very different media for a writer. “Audiobooks gave me an immediate audience to play to. When I read my books on tape, I kept watching for the studio engineer’s reaction. If he or she was not reacting, then I’d figure there was something wrong with my reading.”

She marks her success in her characteristically sly way: “There’s a pretty hot make-out scene in my second book, Rubout. When I finished reading it, the engineer said, ‘I’m divorced, and I’ve been very good for two years, but tonight I think I’m going to go out and be very bad.’ And I thought, ‘I guess I read that one OK. If only the Sisters of St. Joseph couldsee me now. I’m an occasion of sin.’”

“The engineers for my audiobooks were very good and very helpful. When I started tripping over my tongue one afternoon, the engineer told me to take a walk around the block. When I came back, he had me put a pencil in my mouth and talk to him for about ten minutes. It was just chitchat, but the trick worked. I could concentrate again and read smoothly.” The trick ob-viously paid off. Viets is a pleasure to listen to.—Steven Steinbock