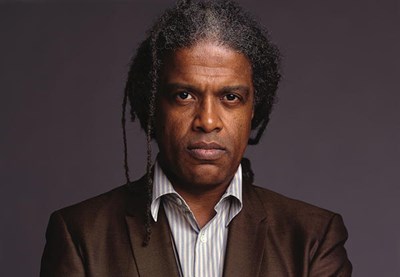 “When I started at NPR, they were still doing radio drama and I loved listening and imagining growing up when radio was that transportive experience. For me, audiobooks are like that.”

Award-winning New York Times movie reviewer, entertainment journalist, and radio and television host Elvis Mitchell says he felt good about the hardcover book and HBO special based on his effort to “take back” the words “black list.” But he was concerned about how THE BLACK LIST would work as an audiobook. “It frankly made me nervous about doing this because I know how audiobooks really work,” Mitchell says. “When an audiobook works, it’s creating an environment for you.”

The tightly edited, inspired, and eloquent interviews reflect Mitchell’s training in radio and his love of the medium. “When I first started at NPR in the late ’70s, they were still doing radio drama. They had a series called RADIO PLAY. I used to love listening to it and imagining what it was like growing up in those days when you listened to radio and there was that kind of transportative experience. For me, a lot of audiobooks are like that.”

Mitchell says he enjoys getting lost in the world created by audiobooks. “Whenever I’m in Los Angeles, I’ll make the drive to Phoenix to see my father. I love getting an audiobook. I think I mentioned somewhere in a review in the Times that I so enjoyed the Robert Evans memoir THE KID STAYS IN THE PICTURE. That was when audiobooks were on cassettes. Remember those big boxes filled with cassettes?”

THE BLACK LIST project came about during a conversation in which Mitchell and photographer Timothy Greenfield-Sanders found a common interest in changing the definition of “black list” from a negative to a positive. Greenfield-Sanders is known for his intimate portraits of world leaders and major cultural figures. Much of his work is shot in large format, and he’s a contributing photographer to Vanity Fair. “Timothy, who is a neighbor of mine here in the East Village, had wanted to do a photo book on African-American life. I said we should get a cool, interesting group of African-Americans, and we’ll call it ‘the black list.’” WEBSTER’S defines a blacklist as “a list of persons who are disapproved of or are to be punished or boycotted.” The pair decided that Greenfield-Sanders would do the portraits and Mitchell would do the interviews. The resulting book focuses on 25 accomplished African-American artists, sports figures, politicians, and businesspeople. Mitchell takes a few moments to introduce each subject before he or she speaks at length about personal battles and fulfilling goals.

Mitchell continues, “Timothy said he thought there was a documentary in this. We shot a couple of test subjects, and from there we put together the film. We shot the whole thing, and after it played the Sundance Film Festival 2008, HBO bought it, and then came the book and the audiobook.”

THE BLACK LIST, TWO is currently in production and is scheduled for airing on HBO in February 2009.--Randy O’Brien