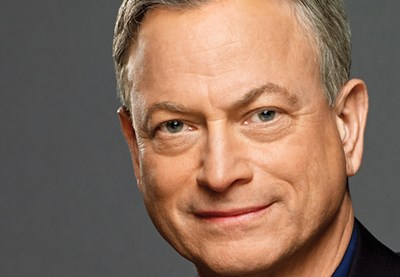 "I saw a need to shine a spotlight on the problems these men and women deal with every day."

Imagine you’re a veteran theater actor being cast in a big Hollywood movie, costarring with Tom Hanks and achieving a level of success that garners you an Oscar nomination. You might think that would be the end of your involvement as Lieutenant Dan in the hit movie Forrest Gump, but an invitation to talk with a group of disabled American veterans set Gary Sinise on a path of service that has taken him from the U.S. to Afghanistan and everywhere in between.

Sinise found his theater voice in a high school production of West Side Story, but it wasn’t an easy route. A teacher spotted him and his friends who played music together and asked them to audition. He landed a small part “I really had struggled in high school until I got in the play, and during the curtain call for the final performance, one of the leads pulled me up front to acknowledge me because the entire cast recognized that my life had changed so much. It made an emotional impact on me that was like nothing I’d experienced before.”

Sinise worked for years in Chicago, helping to create the legendary Steppenwolf Theatre with friends like Joan Allen, Laurie Metcalf, and John Malkovich. He migrated to Los Angeles and was cast in a few movies, eventually getting a call to audition for director Robert Zemeckis for the part of the Vietnam veteran in Forrest Gump. “The experience gave me just a small taste of what it’s like being in a wheelchair and having to deal with a life-changing injury.”

Because of the popularity of Lieutenant Dan, he was asked to speak to a group of disabled veterans because the role had portrayed some of the trials and frustrations returning wounded soldiers had to endure. “I saw a need to shine a spotlight on the problems these men and women deal with every day, and because I respected them so much, I knew I had to do something.”

In 2003, Sinise called the USO (United Service Organization). In fact, he had to make several calls before getting a response only by dropping the name of his character. “I left a message the third time, saying I was Gary Sinise, and I played Lieutenant Dan in the movie Forrest Gump, and I wanted to know if I could go on a tour to support our troops. I ended up doing six handshake tours that year.”

The Lieutenant Dan band soon hit the road, playing hit songs the soldiers had heard on the radio. Sinise continues to work in movies and television, traveling on weekends and between projects. “I’ve been to bases and hospitals all over the world, and the troops are always happy to see us. We’ve played hundreds of concerts for them and their families over the years.”

Sinise is also a veteran audiobook narrator who has portrayed a wide range of characters. “I’ve been King David, reading all the psalms in the Bible. I’ve read John Steinbeck’s OF MICE AND MEN and TRAVELS WITH CHARLEY.” But stepping into the recording booth to record his own story had to be a bit different. “I was in the studio for five days, and it’s hard work. I wrote it so that there would be a dramatic narrative when I read it. I’ve written and directed before, so I knew how to get as much emotional impact as possible from the story.”

Sinise doesn’t pull any punches and delves into subjects that are painful to relive. “I was in the booth by myself with an engineer in the other room. I’d read and ask for playback so I could tell if it was good for me, but there are parts where the pain was very personal, and I wanted to make sure that emotion was there.”

Sinise says nothing could prepare him for the emotional impact of all the places he’s visited and the men and women he’s entertained over the decades. “I know the work is appreciated, and it’s difficult at times not to feel overwhelmed, but what they do on a daily basis is so much more than what I’ve done.”

He’s been called the “Bob Hope of his generation” and has pledged to continue to raise money for veterans through the Gary Sinise Foundation and to entertain the men and women who serve every chance he gets.--Randy O’Brien