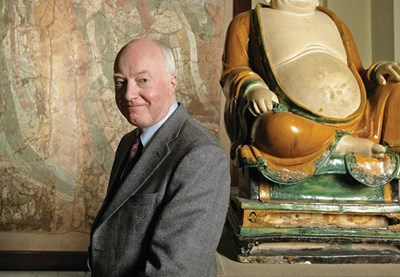 "Menzies has never been an audiobook listener. But since he heard his book, LOST EMPIRE OF ATLANTIS, he’s become a convert. 'Gildart Jackson’s recording is excellent.'"

Author and historical researcher Gavin Menzies has never been an audiobook listener. But since he heard his latest book, LOST EMPIRE OF ATLANTIS, he’s become a convert. “Gildart Jackson’s recording is excellent,” he says, “so good that Marcella and I bought a new CD player for our joint Christmas present to be able to fully appreciate the recording.”

Menzies’s book posed a challenge for its audio publishers because of its illustrations. “Maps are a vital part of my theories,” he says. But the audio was to be marketed only in a digital downloadable form, so including the illustrations was a challenge.

Beth Ives, marketing manager for HarperAudio, says the answer was to offer PDF files that listeners can download and look at while listening to the book. “We’ll usually enhance an audiobook if the print book is heavily illustrated and/or includes maps, etc.,” she says. “We feel that it greatly adds to the listening experience and provides our listeners with all the materials that print readers have.”

Menzies’s most prominent work, 1421: THE YEAR CHINA DISCOVERED THE WORLD, sparked a blaze of criticism worldwide. Many historians asked how the author, a retired submariner now in his 70s, could devise theories such as Chinese mariners circumnavigating the globe well ahead of Magellan. The author replies, “I really discovered nothing. I just connected the dots. The more one learns about history, the more one realizes we know very little.”

In this latest book, Menzies explores the activities of the ancient Minoan civilization, based on the islands of Crete and Santorini. A volcanic explosion that buried Santorini in ash produced a tsunami that devastated Crete and, the author argues, was the water that destroyed pharaoh’s army in the biblical book Exodus.

One of the original pieces of evidence that launched Atlantis was a piece of wall art from 3,600 years ago, preserved by the volcanic fallout, that shows a harbor with sophisticated ships that would have been capable of oceangoing trips to far-flung ports. Those destinations included the Baltic Sea area of Europe, India, and the New World, perhaps as far as copper mines in the western Great Lakes. “The Minoans were amazing and sophisticated,” Menzies says, going on to describe a community with running water and indoor plumbing. His research has uncovered a sophisticated navigation system. “By 1600 B.C. they knew where they were going and had maps.”

The criticism of his earlier work was a reaction to what some viewed as an attack on Christopher Columbus. The reaction to Atlantis has been less pronounced, even supportive. “However, good reviews, in my opinion, do not add much to sales. Bad reviews often do. People like to make up their own minds; 99.4 percent of readers who email have supported the general thrust of the books.”

The British author says the lesson we should take away from his books is this: “How little we know and how much America owes to foreign visitors.”--Richard G. Gotshall