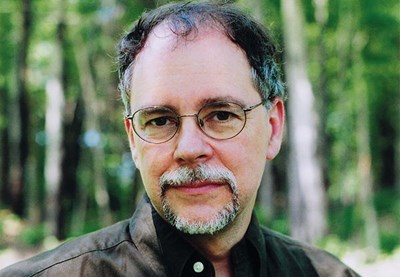 "It is sort of musical, isn’t it? It is musical how one strings a sentence together or takes a paragraph break." 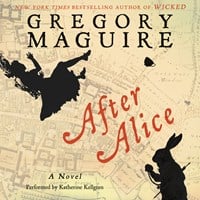 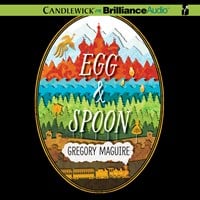 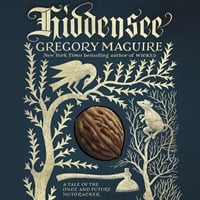 Listening to Gregory Maguire’s recording of LEAPING BEAUTY: AND OTHER ANIMAL TALES, you will meet a gorilla queen, a frog with a promising dance career, and one very bad walrus. You will not, however, hear the story of the very muddy rhinoceros. Maguire may yet write that story—having been inspired in the Harper Audio studio by enunciating into a huge black foam implement [i.e. the microphone] that looks like a used q-tip for a very muddy rhinoceros.

Although, Gregory Maguire’s adult novels, WICKED, CONFESSIONS OF AN UGLY STEPSISTER, and MIRROR, MIRROR, were recorded for audio, this is the first time Maguire has narrated his own work. Having done numerous radio interviews in the past, he says he felt comfortable in the recording booth. His only difficulties, he jokes, were snorting at the drolleries of his own prose.

Concerning the drolleries of his prose, there are plenty. Readers first discovered Maguire’s stylized wit in his brilliant re-imagining of the Wicked Witch of the West. In his book WICKED, Maguire introduces us to the smart, misunderstood girl, Elphaba, whose green skin and general surliness put her at odds with the land of Oz. Maguire went on to give voice to Cinderella’s ugly stepsister, Snow White’s tormentor, and other previously flat and evil characters.

Maguire believes that growing up in a large family may have set the stage for writing about these characters. That isn’t to say that his family was populated with evil characters, only marginalized ones. Maguire remarks that in a large family, No one gets to be the apple of anyone’s eye because there are too many competitors. Through much his childhood, Maguire sat quietly unwilling to compete with the voices of his many brothers and sisters. Maguire adds, It is the person who has not spoken up yet who very often has the most important thing on his mind.

What Maguire had on his mind ten years ago was animals. These were not ordinary animals, but animals cast in fairy tales retold with Maguire’s soon-to-be-famous wit. Maguire wrote LEAPING BEAUTY for a children’s audience just before he starting working on his novel WICKED. He was in a period of what the English call ‘financial embarrassment.’ Maguire imagined LEAPING BEAUTY would be instantly sold because he, himself, found it staggeringly funny.

But Maguire’s publisher rejected the collection of stories because they were too arch and knowing. This was long before Lemony Snicket’s SERIES OF UNFORTUNATE would storm children’s publishing with its own very arch and knowing style. The popularity of the Snicket books and audios has shown the publishing industry that children are now attuned and drawn to sarcasm. Maguire, who by that time had published the very clever HAMLET CHRONICLES for children, decided that it was time to bring LEAPING BEAUTY out of his files. Maguire’s formerly ‘financially embarrassed’ self was pleased to discover that LEAPING BEAUTY was then worth three times what it would have been ten years earlier.

In advance of his recording of LEAPING BEAUTY, Maguire knew he would need confidence, timing, and expression to narrate the book appropriately. "It is sort of musical, isn’t it," he asks. "It is musical how one strings a sentence together or takes a paragraph break." To demonstrate either the drollery of the prose or the musical quality of his narration, Maguire opens the front cover of LEAPING BEAUTY and begins to read aloud. "Once there was a happy family that lived in a beaver dam. Not surprisingly, they were beavers," he intones. His voice IS musical, and he is fully aware of the humor of his own writing. Now that he has stepped up to the rhinoceros’ q-tip and recorded his first audiobook, we’re all in for a bit of fun.—Kirsten Cappy