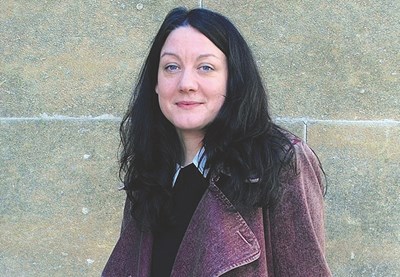 "Two years after putting down the proverbial pen, Macdonald picked up a microphone to record the audiobook." 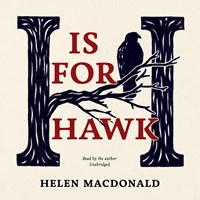 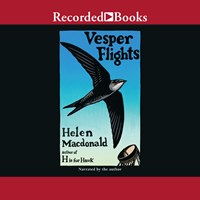 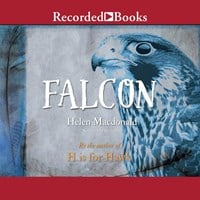 “I’m sitting here with a parrot on my knee having a nice cuddle,” says author Helen Macdonald on the long-distance line from England. “If I upset him, I’m going to have chunks taken out of my arm.”

The parrot in question is a small conure whom Macdonald insists is “really good company.” She adds, “Parrots are like feathery monkeys. They’re brainy, enjoy clambering around, and getting up to mischief. I like my parrot, although he isn’t as good at catching dinner for me as my goshawk.”

That would be Mabel, star of H IS FOR HAWK, Macdonald’s award-winning recent memoir, which interweaves three separate stories--her training of Mabel the goshawk; scenes from the life of author T.H. White, who also trained a goshawk; and Macdonald’s grief following the unexpected death of her father. It’s an unusual mixture, which the author at first worried was too “odd” to submit to her editor. Nonetheless, she persevered. The revelatory result has taken the literary world by storm.

“It’s hard to say without sounding pompous, but I wanted the book to be about more than a bird and a miserable woman,” she says. “I wanted it to be about life and death. Loss and love.”

Two years after putting down the proverbial pen, she picked up a microphone to record the audiobook. “I quite wanted to do it. I thought, ‘At least I know how to pronounce all the falconry terminology correctly.’” She auditioned by submitting several radio plays she had written and recorded. The producer approved, and on a cold December day she drove to Isis Publishing in Oxford.

“It was in a small industrial estate right by the river,” she remembers. “As I turned in, I saw a fellow dressed as a snowman standing outside playing Christmas carols on a trumpet. Evidently, the giant wholesale meat market next door was having some kind of holiday event.”

Inside, all was warm and supportive, for which Macdonald credits the engineer, “a wonderful woman named Trina, who was marvelous--although she did point out that I have routinely mispronounced very common words all my life.”

Recording took three seven-hour days, during which Macdonald sat in a “tiny room the size of a cupboard,” read aloud, and sipped honey and water to protect her throat, which had developed a “Marlene Dietrich drawl” after the first few hours.

While at ease with the falconry descriptions, she found some of the more personal sections difficult to voice. “When you’re narrating, even if it’s your memoir, you become a performer. Then suddenly, you realize that it’s your life that you’re reading, and the emotion drops in. There were times when we had to stop and start again.” On breaks, she went outside to listen to the snowman play the trumpet. She says that the entire experience was “surreal, intense, and absolutely wonderful.”

Touring with the book has been equally meaningful. “I’ve heard so many stories of love and loss from readers and listeners. The book has opened a space for recognition that everyone goes through dark times. I’m a bit of a hermit, and this year has made me--I don’t know--love everyone more. That sounds so cheesy, doesn’t it? But I’ve realized that we are all in it together.”

Whatever her hermitic tendencies, Macdonald has always felt one with the natural world. “When I was a child, I roamed the forest. I’d turn over rocks, play with insects, catch newts. I was lucky. There are so many distractions now that stop kids from getting outside. And people have other concerns. I have American friends who won’t let their kids go into the woods because of Lyme disease. It’s so sad because we’re living on the brink of an environmental apocalypse, and you need a sense of connection to nature in order to want to preserve it.”

For some, reading about Mabel the goshawk will be the closest they get to nature, which is something at least, although Macdonald points out, “We see birds of prey as particularly wild, but biologically a goshawk is just a chicken with talons. It’s because people have trained them for millennia but never domesticated them that transforms the hawks used for falconry into symbols of wildness.”

Upon reflection, she says that symbols can have a role. She used to visit schools with the goshawk. “The first time they see a live hawk up close, children’s eyes light up, and they’re absolutely filled with joy. That’s something we should strive toward.”--Aurelia C. Scott