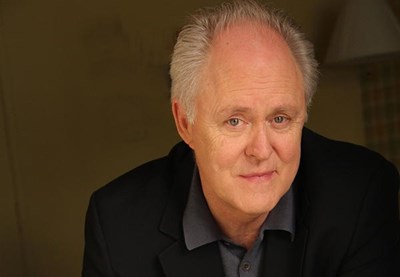 "I love telling stories. Narrating and acting are both forms of storytelling, you’re taking people on an imaginary trip." 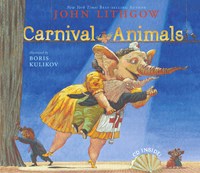 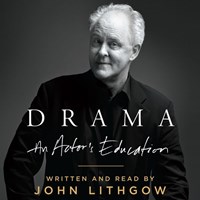 Such is John Lithgow’s belief in the power of the spoken word that when his elderly father was ill and in despair, Lithgow offered to read to him. His father chose a story by P.G. Wodehouse, and as Lithgow read, the miracle happened--his father began to laugh. It sounded, writes Lithgow in his new memoir, Drama: An Actor’s Education, “like the engine of an old car, starting up after years of disuse.” To Lithgow’s grateful ears, “It was the most wonderful sound I’d ever heard. And I’m convinced that it was sometime during the telling of that story that my father came back to life.

“That moment was a gift to both of us,” said Lithgow when we caught up with him during his book tour. “I was able to do for my dad [theater actor and producer Arthur Lithgow] what he had done for my brother and sister and me. He read aloud to us throughout our childhood, taking us into another world and making us laugh. I love that process. That’s why I’ve listened to and narrated audiobooks all my adult life.” The prize-winning actor who has starred in such diverse productions as the television series “3rd Rock from the Sun,” the Broadway hit M. BUTTERFLY, and the film “The World According to Garp” has also narrated everything from Dr. Seuss to his own compilation of the work of 50 poets, titled The Poets’ Corner, for which he won an AudioFile Earphones Award.

“I love telling stories,” Lithgow says. “Narrating and acting are both forms of storytelling. You’re taking people on an imaginary trip, giving them a temporary illusion of an altered reality. It’s always been mysterious to me why we humans need that, but we do. Anything that has an emotional impact, every art--music, painting, theater, books--is a story told.”

His story, DRAMA, includes a colorful and peripatetic childhood during which he decided to become a painter in the Norman Rockwell mode. (Alas, no way.) On to his early acting career, including failure as curtain puller for Marcel Marceau and the triumph of winning a Tony Award for his first Broadway role. Throughout, there’s much joy and some heartbreak. Lithgow tells the truth with no waffling.

“I wondered sometimes, ‘Should I include this or that?’ But you are either honest or dishonest as a storyteller. I believe that the writing is better if you’re honest.” He chuckles. “The truth is that the urge to expose kicks in when you write a memoir. You disclose things you never thought you would reveal. Even my best friends may read this book and say, ‘My God, I never knew this about you!’”

“Narrating, though,” groans Lithgow, “takes so long and is such drudgery.”

But we thought he liked telling stories!

“I do. Telling a story as an actor on stage can be an ecstatic experience. When there’s a spark between you and the audience, you’re often as uplifted as the spectators. It may sound strange, but when an actor is stirred by his own performance, it’s most gratifying. In the recording booth, however, you’re talking to an unseen audience. To keep yourself alive and engaged and engaging is hard work. Hard and worthwhile.”

He ponders for a moment. “This book was different, though. I found that I loved the experience of speaking in my own voice. Of course, there were passages throughout the book that moved me to tears. And, in truth, the whole last chapter was very hard to get through. But that’s good. When it affects me that much, I hope I can count on it affecting the listener.”

Suddenly, he laughs. Enough of this seriousness. “We are all emotional show-offs, we actors. In this audiobook, I was able to tell my own personal story and be an actor. I can’t wait for you to hear it.”--Aurelia C. Scott

[FEB/MAR 08] For most of his life, John Lithgow has created a world filled with “Paloozas.”

“What’s a Palooza?” you ask. According to Lithgow, a Palooza is an activity designed to get a kid interested in something new, creative, and fun. “It’s not just an idea--it’s a different and certainly more fun way of thinking.”

The gifted, award-winning actor/comedian/writer has starred in films as diverse as “The World According to Garp,” “Terms of Endearment,” and “Shrek” and Broadway plays as varied as “Dirty Rotten Scoundrels” and “M. Butterfly” and has won four Emmy Awards.

Lithgow was raised in a home filled with lots of love, and certainly many Paloozas, and has done the same with his children. “Growing up, my family was very artsy and theatrical. We were sort of like a gypsy family since we moved around so much. As a way to be close to my brother, and especially my sisters, we created all sorts of games and activities that were fun.” To this end, he has now created The Lithgow Palooza Company, which promotes his original projects for children, including books such as MAHALIA MOUSE GOES TO COLLEGE, MARSUPIAL SUE, THE REMARKABLE FARKLE MCBRIDE, and LITHGOW PARTY PALOOZAS!

That sense of fun and creativity is perfectly evident in his latest book audiobook, THE POETS’ CORNER, which contains selected poems by 50 poets who were carefully chosen to appeal to listeners who might be new to poetry while also satisfying poetry lovers. Lithgow calls his compilation “The One-and-Only Poetry Book for the Whole Family.” To aid him in his quest, Lithgow assembled a stellar group of actors, including Jodie Foster, Lynn Redgrave, Glenn Close, Billy Connolly, Morgan Freeman, Kathy Bates, Eileen Atkins, Susan Sarandon, Gary Sinise, Sam Waterston, and Helen Mirren, to read these treasured poems. “Matching the performer with the poem was exciting and thrilling,” he says. “They each brought so much to the poems, as I knew they would.” Lithgow himself fills the space between the poems with his own imaginative yet pithy commentary.

Lithgow found recording THE POETS’ CORNER a breezy, delightful, and less emotional experience than other narrations he has done, such as his recording of THE BONFIRE OF THE VANITIES. He admits that since he’s a trained actor, he can sometimes get away with little preparation before he records. “It’s similar to doing radio drama. I can set a certain rhythm, and since I’m a good sight-reader, recording can be a little spontaneous.”

Lithgow is also a fan of listening to audiobooks. He notes that he particularly likes audio presentations of nineteenth-century novels, especially those that are serials. “I particularly enjoyed the audio presentation of Barchester Towers by Anthony Trollope. A good actor and narrator creating so many characters is just great.”

There’s no doubt that listeners to THE POETS’ CORNER may be inspired to give poetry a chance. In fact, it won’t be surprising if John Lithgow’s efforts turn an entire iPod-loving generation into Frost, Burns, or Dickinson groupies. Now, that would certainly be a Palooza--which was probably his intention all along.--Martie Ramm Engle