"There’s a smoothness about [the narrators] reading, and that’s how I feel my writing is. After a while you get caught up in the story, and you forget about the voice, and it just flows over you." 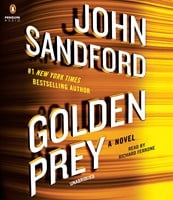 John Sandford defies being pigeonholed or categorized. He’s a man’s man, and his two dozen thrillers are certainly men’s adventures, yet his characters display both sensitivity and sexiness that appeal to female readers. Sandford is a Midwesterner, a longtime resident of Minneapolis/St. Paul. His books are set primarily in Minnesota, with characters who eat, breathe, and sweat the prairie. But his themes and the storytelling with which he reveals them are universal. In 1986 he was awarded the Pulitzer Prize for a newspaper series he wrote about American farm families in crisis. After that, he turned his talents to fiction and has seldom looked back.

“One of the reasons you become a newspaper guy is that you like stories,” he says. “I’m talking about the weird things that happen to people. You might be writing a story about economics or the price of corn, but some farmer will tell you an anecdote about something that happened on the farm.” Sandford chuckles as he recalls an incident in Minneapolis/St. Paul: “A guy tried to rob a barbecue place by crawling down a chimney, and he got stuck. They had to drag him out of the chimney half-dead. You hear stories like this, and they make really good material for novels. They don’t fit into the hard part of the plot, but they’re sort of like decorations. They give a feeling of reality. This is the stuff that cops encounter. You hear these little anecdotes that reflect the chaos of the world on the street, and that’s what I like to put in my books.”

Sandford also recalls hearing stories about WWII from his father and uncles as a child. “Everyone had just gotten back from the war, and you’d hear stories about fighting in New Guinea or the Rhine.”

Not surprisingly, Sandford enjoys listening to audio. “I tend to listen to short stories and nonfiction. I don’t listen to thrillers much. I guess that’s because my attention tends to be a little fragmented when I’m driving. But stuff that comes in short pieces works for me better. I like to listen to history. I also like listening to lectures on audio. I’ve recently been listening to a series of lectures on art history.”

Most of Sandford’s novels have been narrated by Eric Conger and Richard Ferrone. He says, “Both those guys have great voices. They’re both just right for the books. There’s a smoothness about their reading, and that’s how I feel my writing is. After a while you get caught up in the story, and you forget about the voice, and it just flows over you.

“In INVISIBLE PREY I mentioned an actual cop by name, a chief of police in St. Paul. He’s an old friend I used to spar with. He left me a message that he’d just finished listening to my book.” That brought forth an image that made Sandford smile: “my friend driving around in a cop car, listening to my book instead of the police radio.”--Steven E. Steinbock