“When the publisher invited me to [narrate], I had my doubts that I could hold my own with the pros I’ve heard and enjoyed. It was tough, too. I had no idea it takes such stamina. But I think I aced it.” 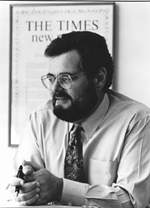 Writer and attorney Jonathan Kirsch has taken the time that most of us haven’t to explore the context of the Old Testament, to discover its meanings, its precedents, its history—and, most of all, to untangle it from censorship and centuries of fallacious accretions. As the Jewish Bible, or Tanakh, forms the superstructure of three major world religions and the core belief systems for most of us on this continent, Kirsch’s subject is of importance to us all.

As he asserts: “The Bible, as familiar as we think it is, is actually a very unfamiliar book to most of us because we’re given a selective, narrow, and highly censored version of it. I was interested in knowing what’s really written in the Bible, why is it in there, and what it meant when it was written down, and why it has been concealed from us.” So he read it and read up on it, and then collated the results of his investigations into three readable books—The Harlot by the Side of the Road, Moses: A Life, and his most recent, King David—all of which have been published on tape as well as paper.

“In each case, what I’m doing is starting with the uncensored and unexpurgated version of the Bible. What I try to do—and this is a big issue in my work—is decode what’s written there by putting it into context, explaining what’s really going on. We’re taught that this comes out of nowhere, that it is this revealed word of God and that it is revolutionary. Part of my work is looking at what the Bible actually says. The other part is sharing with my readers what scholarship has discovered about it. This is material not readily available. It’s certainly not taught in a religious environment. What scholars can show is that everything we read in the Bible comes from somewhere; it is influenced by something; it is borrowed from someone else.

“King David is an excellent example,” Kirsch explains. “David is shown as establishing what was, for its time and place, a modern kingdom, even an empire—with a court and an army and a bureaucracy and what we would call an infrastructure. He didn’t invent that. He was aping Babylon, Assyria, and especially Egypt; he was borrowing from the local pagan culture of the Canaanites to provide ancient Israel with a government.”

The Books of Samuel and Kings also depict David’s sexual peccadilloes, such as his adulterous affair with Bathsheba. “These are not stories told merely for titillation. Sex and politics are often two sides of the same coin. Again and again, when David is shown to act in a sexually adventurous way, it has political repercussions—not to mention theological and moral ones.”

A voracious consumer of audiobooks, Kirsch himself narrates the abridged King David. “When the publisher invited me to do it, I had my doubts that I could hold my own with the pros I’ve heard and enjoyed. It was tough, too. I had no idea it takes such stamina. But I think I aced it.”—Yuri Rasovsky

Editor’s Note: Jonathan Kirsch’s new book, THE WOMAN WHO LAUGHED AT GOD, is read by the author and available unabridged from Books On Tape.