“It’s like music. It has a rhythm to it. If I find I’m getting a little too ponderous, I think, ‘How’s this supposed to sound?’ Then I can go on from there.” 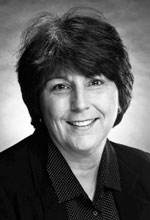 For author Karen DeYoung, writing a biography of Colin Powell was a learning experience, as it was the first book for the veteran Washington Post reporter and editor. Being involved in the audio version of the book proved even more eye-opening.

Years ago, DeYoung listened to audiobooks during long car rides with her children, especially on skiing trips. She remembers listening to MY TEACHER IS AN ALIEN by Bruce Coville. “Of course, this was when they were on cassettes. We’d get them from Recorded Books before we left. It’s not a book I ever would have picked up, but we all enjoyed it.”

As Soldier was being readied for publication, Random House Audio contacted her about an audio version of the book, much to DeYoung’s surprise. She hadn’t known the publisher planned to issue an audio abridgment at the same time as the print version. “I didn’t realize there was a whole industry that involves editing and abridging books for audio. As an editor myself, I can appreciate what they have to go through: I have a 50-inch story, but only a 20-inch hole. So something’s got to give.”

DeYoung was uncertain about abridging the work, though. She estimated the book at 200,000 words, but the audio would have only about 58,000. “When I got the abridgment, I didn’t read it. Everyone told me that you shouldn’t read your audio [abridgment]. I’d been warned not to do it. It leads to lots of arguments. ‘Oh, no! You can’t cut that!’”

Overall, however, she was pleased with the abridgment (done by Karen DiMattia). After it was completed, she listened to the production. “It was depressing in a way,” she says, “because I’d think, ‘Did I really need all those words?’ I think it’s about as good as it could be for the length of the work,” she adds.

DeYoung also had a direct hand in selecting the book’s narrator, Roscoe Orman. Random House sent her audio samples of about a dozen narrators the publisher thought would be appropriate. DeYoung said she first went through them listening for someone who sounded like Colin Powell. “At first, I was listening for his voice. But this was my vision of his life, so I looked for a voice that would fit my idea of how to tell the story. All the voices were acceptable. It was like variations on a theme.”

The concept of music colors DeYoung’s discussion of writing. She sometimes reads a passage out loud to herself, especially when she’s stuck for a thought or a way to construct a paragraph. “It’s like music. It has a rhythm to it. If I find I’m getting a little too ponderous, I think, ‘How’s this supposed to sound?’ Then I can go on from there.”

DeYoung recalls working as a foreign correspondent in Latin America. She was a one-person operation. So for days she would be speaking only Spanish. Then she would have to quickly write a story in English. “I’d read aloud a piece of good journalism to reconnect with English, to get back into the flow of the language again.” --Richard C. Gotshall