“I listen to a lot of audiobooks, and I mostly get them from the library because I’m so picky about the narrators." 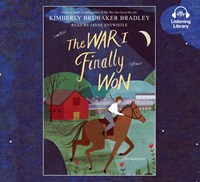 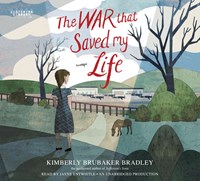 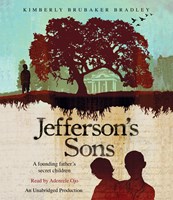 Those who listen to Kimberly Brubaker Bradley’s THE WAR I FINALLY WON may be surprised to find they love it even more than her award-winning first book, THE WAR THAT SAVED MY LIFE. Both books tell the story of a young Londoner named Ada who is sent to the English countryside during WWII.

Bradley herself has been surprised by the book on several occasions. She called her editor, Jessica Dandino Garrison, after her mother read an advance copy of the sequel. “Jess,” she said, “you’ll never believe this, but my mom thinks THE WAR I FINALLY WON is better than the first book.” “That’s weird,” her equally startled editor replied, “mine does, too!”

Bradley didn’t expect her second book would be hard to write. “I knew what was happening, I knew the characters and the basic structure, and I had the voice already. But it was the hardest thing I’ve ever done.” She and her editor worked on nine full revisions before they were satisfied. “It took a long time, and we made so many changes, but after hanging out with the completed story for a couple months, I like THE WAR I FINALLY WON better--and I didn’t expect that. The ending of the book pleases me enormously. The difference between Ada at the start of the second book and the end was what I was trying to achieve all along.”

There’s continuity in Ada’s healing and growth in the two books. She suffers from her club foot, Mam’s cruelty, limited experiences, and difficulties imposed by war, but in both stories she grows in her understanding of the world, and she’s never a victim. “I want kids to know that you can be resilient and you don’t have to be defined by your circumstances.”

In touring, Bradley says that a lot of children have told her about their difficult lives. “One wanted to know how to manage hard things. And I said I don’t know how you manage because everyone’s hard things are different, but I know it’s possible to get through them. That you can find a way out.”

Bradley’s fans will be happy to learn she’s considering a third book. “The most likely narrative character is Ruth, but I haven’t gotten far enough to decide when the book would start. If I use Ruth, I have a whole lot of choices. I could start in Germany, I could start at Bletchley, I could start anywhere in between.” Ruth, a brilliant German-Jewish refugee, changes Ada and is changed by her. Originally, Ruth started out as a minor character. “But we kept giving her more and more of a role, and she entered earlier and earlier in the narrative.”

Bradley is an audiobook lover. “I listen to a lot of audiobooks, and I mostly get them from the library because I’m so picky about the narrators. A lot of times when I’m on a trip, I’ll take out an audiobook and then go back and read the book when I come home because I just don’t like the narrator.”

Several of her books have come out on audio, and she’s always been happy with them. But she thinks Jane Entwistle’s reading of THE WAR THAT SAVED MY LIFE is brilliant. “I would go around town listening to the audio, and I’d stop at the grocery store and have tears streaming down my face because to me Jane’s voice is the voice I heard in my head when I wrote the book. It’s the only time it’s ever matched like that. She’s perfect at giving all the characters the right nuances. I love listening to her.”

Bradley was super pleased when Entwistle won the 2016 Odyssey Award for her narration. “We met because of that as we both had to give speeches. We play off each other very well, so Listening Library had us tour together. She’d read a section of the book, and I’d dissolve into tears, and then she’d dissolve into tears. We were just a giant mess.”

At the time of this interview Bradley had not heard Entwistle’s newest recording. Her copy of THE WAR I FINALLY WON arrived after she left on her book tour. “I know it’s waiting for me when I get home, and I’m dying to hear it.”--Susie Wilde