"I still like to think of myself as a fisherman, but when I’m gone for two months on a book tour as well as the time it takes to write and record the books, I have to wonder!" 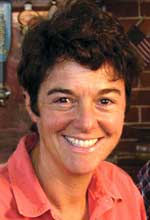 "I still like to think of myself as a fisherman," says Linda Greenlaw, of Isle Au Haut, Maine, "but when I’m gone for two months on a book tour as well as the time it takes to write and record the books, I have to wonder!"

Greenlaw’s first book, THE HUNGRY OCEAN, climbed to the top of the bestseller lists on the heels of Sebastian Junger’s PERFECT STORM. Following her 1983 graduation from Maine’s elite Colby College, the island resident abandoned plans for law school to devote her life to pursuing the work that paid for her education—swordfishing in the desolate waters east of the Grand Banks of Newfoundland. To the horror of her loving parents, she swapped days in a cushy law office for month-long stints aboard a pitching boat. The study of case law became the study of marine charts and meteorology. Preparing legal briefs gave way to preparing fishing gear. Courtroom arguments turned into crew management. Finding loopholes paled against finding fish. In all of these, Linda Greenlaw excelled. Junger described her as "one of the best captains, period, on the entire East Coast."

Following the movie release of THE PERFECT STORM in 2000, Greenlaw didn’t bother to return the first publisher’s call asking for her story. But when three more came within a week, she decided to get an agent. He sold her brief proposal at auction for more money than she had ever made in a year of fishing.

The publisher suggested a ghostwriter, but Greenlaw decided to write the book herself. "I do have a degree in English, after all!" She treats writing like a job, sitting down at the computer every day until each book is done. "I don’t enjoy writing," she admits. "I wish I did, but the truth is I prefer fishing."

When it came to recording THE HUNGRY OCEAN, Brilliance requested that she read her own work. Recording proved even harder than writing. "I was sure I was going to be fired the first day," she says. After the first audiobook brought good feedback, she decided to continue recording her own. "It’s about my life," she explains, "and it’s personal." Greenlaw credits director Sandy Burr, herself an experienced audiobook narrator, with much of her audio success.

The author recorded both THE HUNGRY OCEAN and THE LOBSTER CHRONICLES in abridged and unabridged editions, but not ALL FISHERMEN ARE LIARS. She says she didn’t feel good about the two abridgments, especially as the parts left out were some of her favorites.

While she can no longer fish as much as she’d like, Greenlaw says writing has been a great challenge, with its own set of rewards. Are her parents happy that she’s finally using that degree? "Oh yeah," she laughs. "They were proud of me as a swordfish captain, but they’re very happy that I’m not out there anymore. They used to worry about my safety all the time." And as far as finding material, she says, there’s no end to sea stories.—Ruth P.L. Lind