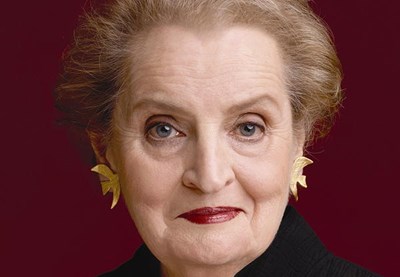 “Audiobooks are a fantastic departure. I think they’re great. They make us much more literate because we have greater access to literature than we would otherwise.” 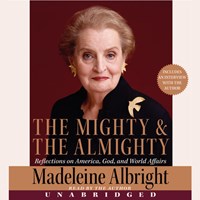 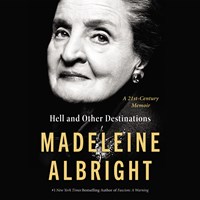 In her new book, THE MIGHTY & THE ALMIGHTY , Madeleine Albright, former Secretary of State and American Ambassador to the United Nations, reflects on the convergence of politics, religion, and morality in the modern world. At a time when differing religious concepts clash throughout the world, she believes we can transform religion into a force for global stability. It’s an important and serious book written by an important and serious woman who knows how to leaven the analysis with humor. Early in the book, she quips that as a woman of Jewish heritage who was raised Catholic and married Episcopalian and who has worked frequently in the Muslim world, she may be uniquely qualified to write about religion in world politics.

Albright, who narrates the unabridged audio of her new work, brings a diplomat’s understanding of the power of the spoken word to her narration. “I talk for a living,” she told AUDIOFILE in a recent telephone interview. “In diplomacy you’re surrounded by paper, but in the end, the ability you have to articulate makes a big difference.” Albright often reads her writing aloud to herself to test its coherence and strength. “When you read something out loud, you realize that sentences that look OK on paper don’t sound right—too many subordinate clauses!” She says that through reading aloud, she has “unlearned the academic writing tradition of the more complicated the better” and learned to write as simply as possible.

Nonetheless, as Albright first learned in 2003, when she recorded the abridged and unabridged versions of her bestselling memoir, MADAM SECRETARY , narrating even a simply written book is work. “You have to be careful not to slur or contract words,” she says. “Your throat becomes sore, and your body aches from sitting still for hours in a cramped sound booth.” THE MIGHTY & THE ALMIGHTY is densely packed nonfiction that cannot be read aloud quickly. Albright had to use a more measured pace when narrating it than she did for her memoir. “But it’s not easy to read that way without putting people to sleep! You don’t want listeners to drive off the road.”

So she worked hard to vary the tone and relied on her speech-making skills. Was it worth the effort? Absolutely. She persevered in part, she says with a laugh, because wanting to hear your own voice reading your own words is “a little bit of self-love.” Also, people have told her that she has an interesting and reassuring voice. “And as the whole point of this book is not to exacerbate issues but to find common threads, I do think that it is important to have a reassuring narrative voice.”

Now she hopes the book will generate discussion. The audio version may do this particularly well because people have so many more opportunities for listening than for reading. “Audiobooks are a fantastic departure,” enthuses Albright. “I think they’re great. They make us much more literate because we have greater access to literature than we would otherwise.” Let the discussions begin.—Aurelia C. Scott