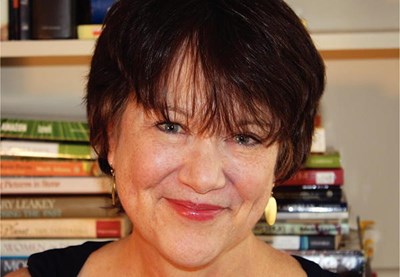 "I know how important the narrator is in an audiobook because I listen to them all the time, as does my husband. We’re devoted fans.” 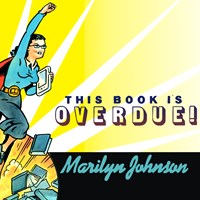 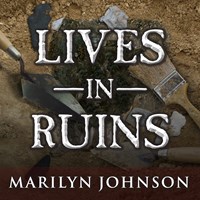 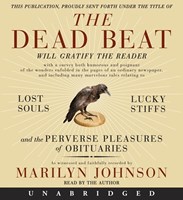 “Really, there’s nothing so fun as being chased down a tropical mountainside by killer bees.” Still revved by the experiences chronicled in her newest book, LIVES IN RUINS, a funny and informative foray into field archaeology, Marilyn Johnson compares the killer bee adventure to being “pursued by the boy you had a crush on at age 6.”

Despite such thrills, Johnson’s decision to go off with archaeologists surprised her nearest and dearest when she first proposed it. Her previous books, THE DEAD BEAT (about obituaries and obituary writers) and THIS BOOK IS OVERDUE! HOW LIBRARIANS AND CYBRARIANS CAN SAVE US ALL, derived from her breakfast-time reading of newspaper obituaries and her professional gratitude to research librarians. This book was less obvious. Even her mother said, “I can’t believe it.”

“I am the least likely person to sit in the hot sun with insects swarming about,” Johnson explains. “I like to look at nature through my window.” However, once she gave the great outdoors a try, she completely forgot that “it’s the ickiest thing,” and discovered that “it’s great fun to suffer.” And really, she reasons, “We all start out digging in sandboxes or on the beach.” Trekking after archaeologists was her way back into the sandbox.

Not that her chosen subjects made it easy. Johnson didn’t know any archaeologists when she started, and she quickly learned that they’re “much harder to burrow in with” than librarians and obit writers. So she read copiously, pursued potential leads with emails, and paid to attend an archaeological field school. At last, one contact led to another, a man with a trowel invited her on a dig, and she was off--to Irish peat bogs, a Peruvian mountain, the rocks on Cyprus, under the Atlantic, and many other quixotic locations.

Whether archaeologists, librarians, or obit writers, Johnson says that all the people in her books are “engaged in the task of saving bits of our cultural history. It’s an endless, impossible job,” she adds. “We are living in a time when you can just hear the flush [of history going down the drain]. So anyone who tries to keep it from sinking further out of sight is doing something heroic.”

Speaking of heroic, Johnson narrated the audio version of her first book. It was during a summer heat wave; she was sick with what turned out be meningitis, and, as she says, “I’m a writer, not a narrator.” A sigh of relief all around that actress Hillary Huber now narrates her books.

The author and narrator follow each other on social media and talk frequently about such issues as how to pronounce “Clonycavan” (an Irish town in whose peat bog an Iron Age body was discovered).

“Hillary does a great job,” Johnson enthuses. “And I know how important the narrator is in an audiobook because I listen to them all the time, as does my husband. We’re devoted fans.”

Johnson’s husband evidently becomes grumpy without a new audiobook in waiting. “He has an iPod companion glued to him. He listens while walking, working out, doing chores, everything.”

In the last year, Johnson’s research and writing got in the way of much listening, but she made an exception for BRING UP THE BODIES, Hilary Mantel’s second novel about Thomas Cromwell. “I was traveling in England for my book. There’s something so eerie and fabulous about listening to something brilliantly narrated about the history of the place you are while you’re walking through it. It enhanced my trip tremendously. If I had had the book itself, when I finished it, I would have gone back to the first chapter to remember how Mantel had begun it.”

Instead, she started to re-listen. She was on the way home and ended up hearing the entire book all over again. “It was the greatest transatlantic flight ever!”--Aurelia C. Scott

Editors’ Note: Johnson emphasizes that the “characters” in LIVES IN RUINS are “real people working right now in vital areas.” To learn more about them, visit www.marilynjohnson.net, which has links to the people and places, and features a book trailer starring “some really fantastic-looking archaeologists.”