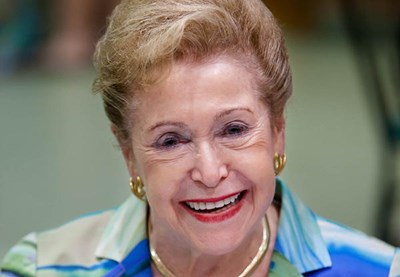 “Years ago people were surprised when paperback rights came out. It’s similar with audio. At first, nobody thought about the audio rights, now they’re part of the book contract."

There are few people busier than the “Queen of Suspense.” The day of her interview with AudioFile, Mary Higgins Clark enjoyed a special luncheon attended by members of her French book club. That evening she was to have dinner with her editor to talk about her new book.

“Like many people my age, I came to audio through radio,” she explained. “When I was a child, I had a great deal of asthma. After a long night, it would often ease up in the morning. That’s when I would be propped up with pillows and kept company by the old radio shows.” Her favorite was “Our Gal Sunday,” which asked the question, “Can a little girl from a mining town in the west find happiness as the wife of England’s richest, most handsome nobleman, Lord Henry Brinthrop?” Ms. Clark paid homage to her old favorite with her book MY GAL SUNDAY, which turned the nobleman into Henry Parker Britton IV, President of the United States.

Before she began writing novels, Ms. Clark spent 15 years writing syndicated radio shows in New York City, where she learned how to “write for the ear.” She has the utmost respect for audiobook narrators. “My hat is permanently off to anyone who narrates,” she said. She spoke from personal experience, having narrated her first book (GEORGE WASHINGTON ASPIRED TO THE HEAVENS), as well as her daughter Carol’s first book (DECKED). She likened the popularity of audiobooks to the phenomenon of paperback books. “Years ago people were surprised when paperback rights came out, and now they’re the tail waving the dog of the publishing industry. It’s similar with audio. At first, nobody even thought about the audio rights, but now they’re a vital part of the book contract. The way they’ve grown is amazing. It’s the ultimate story telling when somebody reads to you. I think they’re wonderful.”

Ms. Clark listens to audiobooks in the car, often with her husband. They drive several hours to their vacation homes in a Victorian shore town in New Jersey, where Ms. Clark is setting her next book, and to their home on Cape Cod. “I tend to listen to books that I’m afraid I’m going to miss,” she said, referring to her busy schedule. She also remembered the first time she listened to one of her own books. “I was so engrossed I went through a stop sign!” –Elizabeth K. Dodge